Those of us who hadn’t read all our emails got up Sunday morning, August 20, thinking we were going to be treated to Susan Maneck talking about “Time and the Containment of Evil: The Zoroastrian Cosmology.” Instead, we found out that she had been called away for a family emergency and did not have a reliable email connection. We will hear her talk at a later time, yet to be decided. Her course Zoroastrianism for Deepening and Dialogue began on schedule on August 25.

What to do on such short notice? Dr. Robert H. Stockman, the director of the Wilmette Institute, stepped into the breach with a talk on “The Ministry of Shoghi Effendi.” And what a Web Talk it was, filled out with Dr. Stockman’s decades-long research on and study about the history of the Faith and illustrated with numerous photographs of Shoghi Effendi and his projects. 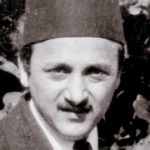 In brief, Dr. Stockman began with ‘Abdu’l-Bahá’s Will and Testament and Shoghi Effendi’s childhood and youth; his primary and higher education; his role as ‘Abdu’l-Bahá’s secretary; his recuperation from exhaustion in Paris and London; his Oxford days and his last days in England after His beloved grandfather’s passing; his transition into his role as Guardian of the Cause of God; the crises attending his appointment; and his retreat to Switzerland before tackling the position to which ‘Abdu’l-Bahá has appointed him.

Then Dr. Stockman turned to the mandates that shaped Shoghi Effendi’s guardianship: the Tablet of Carmel, the Tablets of the Divine Plan, and the Will and Testament, giving him five priorities: 1) spreading the organization of the Bahá’í Faith with local and national Spiritual Assemblies; 2) providing interpretations of the Bahá’í writings; 3) making translations of the Bahá’í writings; 4) developing the Bahá’í World Center; and 5) implementing ‘Abdu’l-Bahá’s Divine Plan for spreading the Faith throughout the world.

Dr. Stockman ended with the shock that came with the passing of the Guardian, the interregnum, Covenant-breaking, the conclusion of Shoghi Effendi’s Ten Year World Crusade, and the election of the Universal House of Justice. Questions and answers followed the Web Talk. Here is what some of the listeners had to say about the talk:

The seminar Sunday was fantastic! Insightful, informative, meaningful. Loved hearing a new response to the question of why he didn’t leave a will and that he actually did leave a testament—just never thought of it that way.—PERJEAH DHEVUN

Please convey my thanks and appreciation to Dr. Stockman for his excellent webinar presentation, “The Ministry of Shoghi Effendi.”—SOHRAB KOUROSH

Great webinar.  It is “as God wills!” Shoghi Effendi is a giant of the 20th century. And I am just starting to tutor Book 8, Unit 2, “The Guardian of the Faith.” Coincidence with a Capital “C.”—IRENE ATKINSON

I have just finished listening/watching Robert’s session on Shoghi Effendi on YouTube. Yea! for Robert! Miracle man! Shoghi Effendi in 1 hour. My goodness, you are to be congratulated, crisp, without error, with humility, extremely well put together. Enjoyed all of it. Am still smiling!—GEORGIE SKEAFF

You can listen to the Web Talk on the Wilmette Institute’s YouTube channel and also access and print out Dr. Stockman’s PowerPoint.