A New PowerPoint Shows the Badí‘ Calendar as Circles

Mark Lutness, a faculty in the Wilmette Institute’s popular course on the Badí‘ calendar, has prepared an attractive and colorful PowerPoint that the Wilmette Institute has uploaded to its public website here. Called Pictures of Time or The Come-Now-Circle-Around-Him Calendar, the 24-slide PowerPoint elegantly presents the divisions of the Bahá’í calendar, not as rectangles and boxes that we are accustomed to in traditional calendars, but rather as circles and symmetrical groups of circles. Mark repeats some of the information about the Báb’s association of the first three months of the year with fire, the next four months with air, the next six months with water, and the last six months with earth (see Nader Saiedi, The Gate of the Heart 328). 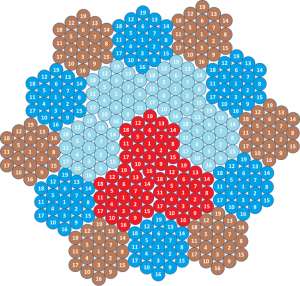 Coincidentally, as you add circles to an image, the image is symmetrical after 3, 4, 6, and 6 circles have been added. A Kull-i-shay, or 361 circles, makes yet another symmetrical shape. It turns out that the Bahá’í calendar can be displayed using fractals, “a natural phenomenon or a mathematical set that exhibits a repeating pattern that displays at every scale” (Wikipedia article, “Fractal”). Mark’s PowerPoint elegantly illustrates the point.

Mark concludes his presentation by saying that 19 years make up a Váhid and that nineteen Váhids (19 x 19 = 361) make up a Kull-i-Shay’, which is 361 years. Then he notes that the Bahá’í era is less than 200 years old. For those who like to keep track of where we are in the scheme of things: We are just starting the middle Váhid of the first Kull-i-Shay’.

If you are looking for more information on calendars, you will find a great deal of information on the Wilmette’s public website, much of it in projects generated by learners in the course The Badí` (Bahá’í) Calendar: Reshaping Our Material, Social, and Spiritual Reality. Try these links: