↓ Skip to Main Content
Home › Learners › An Australian Bahá’í’s Journey in Interfaith Dialogue, Part 2: From Learning to Action in and outside Ruhi Classes

An Australian Bahá’í’s Journey in Interfaith Dialogue, Part 2: From Learning to Action in and outside Ruhi Classes

In April, the editors shared what Australian Bahá’í Colin Dibdin had learned from the Wilmette Institute course Preparing for Interfaith Dialogue, much of which centered around the skill of listening (see “Consorting with Followers of All Religions with Confidence”). He ended his comments in his Learning Self-Assessment by saying: “I have begun sharing the knowledge with others in small groups and applying it by visiting a friend’s church. I am looking for an interfaith group that I can join and also have started a very small interfaith group that will be bringing insights to a set of topics that the group is formulating.” To the editors’ delight, Colin added a post script to his Learning Self-Assessment, sharing how he is continuing to work on his goals for interfaith dialogue.—THE EDITORS

Colin Dibdin began his update by repeating points from the learning plan he prepared at the beginning of Preparing for Interfaith Dialogue:

1. To know what others of all Faiths, who are experienced in interfaith dialogue have learned about doing it in a unifying and constructive way.
2. To improve my ability to create and maintain conditions for learning and teaching with others whose beliefs differ from mine.
3. To develop these skills during discussions and collaborations with those of other Faiths, mainly in conversation or one-on-one dialogue, but also in small groups.

Then Colin recounted what actions he has taken. The following paragraphs are his own words:

I feel that I substantially achieved points 1 and 2 and am working on 3. The following comments describe the beginning steps in starting interfaith dialogue at my local level.

Background. Interfaith dialogue has been a passion of mine since, as a child, my parents (Christians who became Bahá’ís before they married) pioneered to a country town where there was some opposition from a local church. In the 1990s I was invited to teach the “Christianity” course at Yerrinbool Centre of Learning, and I chose to focus on dialogue skills and developing an appreciation of Jesus and the Bible among young people whose experiences with Christians had been somewhat negative. From 2006 until the present, with the encouragement of an Auxiliary Board member, I put “interfaith” on hold due to the need for the community and myself to focus on the “instrument of limitless potential,” also known as the institute process.

While taking this Wilmette Institute course [Preparing for Interfaith Dialogue], and before deciding whether or not to put any energy into local interfaith dialogue, I consulted with Ida Walker, Venus Khalessi and Natalie Mobini whose responsibility it is to further this kind of work at a regional, national, and sometimes international level. They directed me to letters from the Universal House of Justice and a letter of the National Spiritual Assembly of Australia, which gave me sufficient confidence that this field of service at the local level could be timely for me and need not distract from the core activities.

A Beginning. I could find no organized interfaith dialogue at my local level and only a little in other parts of Sydney. I am reluctant to start anything that would need a lot of time or administration. The Ruhi study circle in which I participate, which consisted of followers of several Faiths, was “between books,” having completed Ruhi book 1. Hence I invited the group to discuss interfaith dialogue for a few weeks.

First Meeting. For the first meeting we looked at some of the Wilmette course resources and what kinds of activity would be realistic for us. It became clear that it would not be efficient to focus on studying each religion. Studying religions is best done through personal research and engagement in written discourse, supplemented by asking questions. We also realized that none of us had time to expand the scope of our existing group to include solving social problems, except to the extent that we are already doing that through Ruhi service outcomes. So we decided to continue with the discussion format.

Second Meeting. In the second meeting our Christian participant led a discussion on the book Beyond the Culture of Contest by Michael Karlberg, who, she was aware, is a Bahá’í.

Third Meeting. In the third meeting we brought our ideas for some potential topics for further dialogue. My contribution was to suggest the following topics, based on the Bahá’í World News Service article “The evolving Baha’i perspective on interfaith dialogue,” par. 6–8:

1.  Purpose (How and why has God made His wishes known?)
2.  Unity (What is unity, and is it important?)
3.  Meetings (What does a spiritual meeting look like?)
4.  Giving (Is there a relationship between material means and spiritual results?)
5.  Teaching (How should we share the message of God?)
6.  Educators (Does humanity need a Teacher?)
7.  Truth (How may we recognize truth?)
8.  Change (What is happening to humanity?)
9.  Peace (Can humanity achieve peace?)
10.  Justice (What would a just society look like?)
11.  Equality (Does God view women and men differently?)
12.  Education (How should we raise our children?) 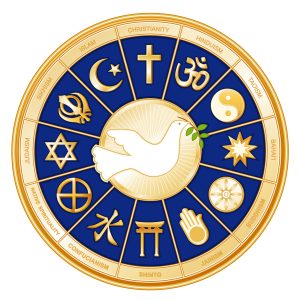 In our fourth meeting, on March 13, 2019, the focus of discussion was one of the questions drawn from the Bahá’í World News story: “In what ways does religion have a vital and constructive role to play in the life of humanity?” To prompt our thinking, we looked at a short compilation containing some current negative views (found on the Internet), and went on to consider the more optimistic (and I believe more realistic) perspective described by ‘Abdu’l-Bahá and the Universal House of Justice. For reference I have attached the quotes containing those negative and positive views. We did not complete our discussion and decided to continue the topic when we next meet in April.

Future Meetings. For future meetings we intend, at this stage, to resume our study circle by starting Ruhi Book 2, without mingling it with the activity of interfaith dialogue. However, from time to time (probably every two months), we will have an interfaith dialogue meeting and invite others to participate. I imagine these activities will be coherent because Ruhi Book 2 develops skills in raising the level of our personal conversations above materialistic and sectarian concerns, while interfaith dialogue provides an opportunity to practice that skill.

Taking Advantage of Interfaith Opportunities. Also during February I was invited to the baptism of our Christian friend into the Coptic Orthodox Church. This led to me overcoming some prejudice of my own (I imagined that Orthodox churches would be “dark, obscure, and unfriendly” but have found the opposite to be true). Also, my wife and I participated in their Bible study and made some new friends.

I will continue doing what I’m doing but more consciously—that is, one-on-one dialogues with followers of other religions wherever the opportunity arises, including visiting their places of worship, as well as in small group discussions when those can be organized.

Stay tuned in June, when the eNewsletter will share more of Colin Dibdin’s interfaith activities—a presentation he has made on the topic. Here is the link to the first article about Colin’s learnings, published in the April Wilmette Institute eNewsletter.