A Variety of Meaningful Conversations: Word Cloud, Fireside, Presentation to a Friend

Julia Sears-Hartley, a third-generation learner (on both sides of her family) in the Wilmette Institute 2015 course Epistle to the Son of the Wolf and a contract quality-oversight person in the biotech industry, took the course because she had tried several time to read and study the book and had never finished. She says the likes the “idea of taking a course and following a more systematic approach.” As she read Epistle, she shared her new understanding of the concept “Fear of God,” asked her fellow students to join the discussion, and offered a word cloud of what she had found about the fear of God.

“It is interesting how many times “Fear God” is included in the first section of the Epistle to the Son of the Wolf.  It first appears in the third paragraph: ‘Purify thou, first, thy soul with the waters of renunciation, and adorn thine head with the crown of the fear of God, and thy temple with the ornament of reliance upon Him.'”—Epistle 2

“There are many other occurrences throughout the first section, including:

“`We enjoin the servants of God and His handmaidens to be pure and to fear God, that they may shake off the slumber of their corrupt desires, and turn toward God, the Maker of the heavens and of the earth.’”—Epistle 23.

“`There is no glory for him that committeth disorder on the earth after it hath been made so good. Fear God, O people, and be not of them that act unjustly.’”— Epistle 24

“`In this Revelation the hosts which can render it victorious are the hosts of praiseworthy deeds and upright character. The leader and commander of these hosts hath ever been the fear of God, a fear that encompasseth all things, and reigneth over all things.’”—Epistle 26

“The fear of God hath ever been the prime factor in the education of His creatures. Well is it with them that have attained thereunto!”—Epistle 27

“The first word which the Abhá Pen hath revealed and inscribed on the first leaf of Paradise is this: ‘Verily I say: The fear of God hath ever been a sure defence and a safe stronghold for all the peoples of the world. It is the chief cause of the protection of mankind, and the supreme instrument for its preservation. Indeed, there existeth in man a faculty which deterreth him from, and guardeth him against, whatever is unworthy and unseemly, and which is known as his sense of shame.’”—Epistle 27

I have always struggled to understand the fear of God, because it sounds so severe and scary and not loving. After reading the quotes about fear in Epistle to the Son of the Wolf I have changed my perception of what is meant by fear of God.  Perhaps it is a fear founded on love and the need to feel the love and pleasure of God by following the commandments He prescribes through the manifestation. Similar to not wanting to disappoint those you love, perhaps your parents by behaving badly . . . not wanting to feel their disappointment or shame that you have done something that has caused that disappointment. . . .

For another perspective on the fear of God, Dr. Robert H. Stockman, who holds a doctorate in history of religion in the United States from Harvard University, offered the following comments to provide more context: A famous scholar of religion, Rudolf Otto, once wrote a book titled (in English) The Idea of the Holy, in which he analyzed the experience people had when they encountered “God” (which he called “the Holy”). He defined the experience of “the Holy” using the term mysterium tremendum (great mystery) and noted that the experience generated two opposite feelings. Because the mystery of the Holy was puzzling and intriguing, it had an attractive aspect that he called fascinans (fascination). But, because the mystery was great, way beyond our understanding and, therefore, potentially dangerous to us, it had a repulsive aspect, which he termed tremor (a Latin root from which we get “tremble” and which comes from tremendum). The fear of God derives from the tremor aspect of the Holy. When asked whether tremor should be considered good or bad or cautionary, Dr. Stockman replied, “That is the point. We are naturally afraid of something much bigger and utterly different from ourselves, as we should be.” 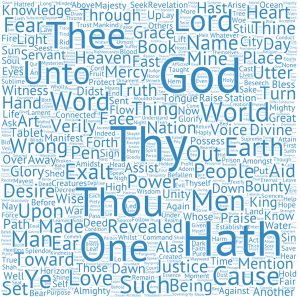 Here is a word cloud that Julia Sears-Hartley made from the first section of Epistle to the Son of the Wolf.

The Bahá’í Faith and Philosophy 2015 and an Unexpected Conclusion

Dean Martineau, who has taken five Wilmette Institute courses over the last five years, submitted as his final project in the 2015 course The Bahá’í Faith and Philosophy an account of a fireside he prepared as part of the Washington (State) Bahá’í History Museum’s program “From Presentation to Conversation,” which pairs seasoned Bahá’ís with those less skilled in talking about the Bahá’í Faith (see “Washington (State) Bahá’í History Museum: More Than a Museum,” in this issue of the eNewsletter). Be prepared for a surprise ending in this account.

“I have completed another Wilmette Institute course, following my usual pattern of reading a lot and saying almost nothing. This time, though, was significantly different because I gave a presentation based on course content.

“At the Washington Bahá’í History Museum . . . we have a Saturday night curriculum of firesides. The program is called “From Presentation to Conversation,” where we give a thirty-ish-minute presentation, and then highlight three main points that will, we hope, lead to conversation.

“My chosen topic was “Faith and Reason.” I leaned heavily on a paper written by faculty member Ian Kluge’s article “Reason and the Bahá’í Writings”  [published in 2013 in Lights of Irfán (14:163–232]. I also enjoyed using the newly translated Some Answered Questions to point out the importance given by the Faith to reason and proof.

“My three points leading to discussion were (1) the importance of reason in the Bahá’í Faith, (2) an example of its use (reading ‘Abdu’l-Bahá’s talk called “Proofs and Evidences of the Existence of God,” with some clarifications pulled from Mr. Kluge’s paper,) and (3) the limitations of reason.

“There were three people there who were not members of the Bahá’í community, as well as several others who were. One seeker asked an excellent question, if I understood it and can recall: ‘How does he know if the Bahá’í writings are using proof texts as a weapon to keep people in line.’ I suggested that he would need to investigate to see if this happens. That this is where the Holy Spirit enters. When I saw that man yesterday, he announced his intention to sign his declaration card today. So the presentation and the answer didn’t discourage him overly much. Overall, the feedback on the presentation was positive.”

Exploring the Hebrew Bible 2015: Sharing with a Friend

Jeanne Wright, a first-time Wilmette Institute learner, offered as her final project for the course Exploring the Hebrew Bible (offered in February 2015) an account of the presentation she made to a friend and fellow Bahá’í. She thanked faculty member Ted Brownstein, saying that she “really enjoyed and benefitted from this class.”

“I made a presentation [to a Bahá’í friend in my home] about our Hebrew Bible course, focusing on what the Bible is and the message of the prophet Ezekiel. . . . Like myself, Mary tends to ask questions about things she is interested in, especially spiritual/religious information. We talked a lot about Dr. Christine Hayes’ Yale University video called “Introduction to the Old Testament.” Like myself, Mary was very interested in Hayes’ theme of myths of the Bible. We talked about them at length, as well as about the relationship between God and the Israelites, as explored in this course.

“We then talked about the Prophet Ezekiel, whom I found very intriguing in this course. Using the article written by Dr. Solomon Bennett Freehof, “The Historical Jewish Perspective on the Acceptance of the Book of Ezekiel as Sacred Scripture,” we talked about why the Book of Ezekiel was almost excluded from the Hebrew Bible and what an important prophetic figure Ezekiel was to the Israelites and is to the Jewish people in this day and age. Mary had already read the short paper I wrote called “Accountability for Sin.” She found it interesting and, because of it, thought perhaps Ezekiel’s message of individual accountability did away with the concept of Original Sin on which so many Christians focus. I will do more research about that and let her know what I find out.  [On Google I did find out that the concept of Original Sin started in the fourth century by Augustine of Hippo].

“We concluded with a brief look at a Bahá’í writing that validates the unification of the Israelites in the age of Bahá’u’lláh.

Ezekiel 34:12–13: As a shepherd seeks out his flock when some of his sheep have been scattered abroad, so will I seek out my sheep; and I will rescue them from all places where they have been scattered on a day of clouds and thick darkness. And I will bring them out from the peoples, and gather them from the countries, and will bring them into their own land; and I will feed them on the mountains of Israel, by the fountains, and in all the inhabited places of the country.

We talked about a Bahá’í writing related to Ezekiel 34:12–13: Ten Days in the Light of ‘Akká, page 73. It was published in 1907 when ‘Abdu’l-Bahá visited Acre for a special dinner. “Mírzá Asadulláh introduced Mr. [Howard] MacNutt saying, “He is one of our eloquent American brothers who has great power. God has given him the power to attract souls to the Fountain of Life. . . . We have not been brought into this blessed brotherhood of the East and the West through miracles, but through the Word of the Manifestation of God Bahá’u’lláh. Through His Word the prophecy of Christ has been fulfilled, that they should come from the East and the West to sit down at the Table of the Lord.  Jesus said that the coming of the Son of Man would be as the flash of lightning from the East to the West. All these proofs are confirmed here tonight.

“Ezekiel 34:12–13 refers to the unification of the Israelite tribes in the land of Jacob, Israel. This did not happen in the time of Jesus. It began in the time of Bahá’u’lláh in 1948 when Israel was declared a nation.

“Mary said she was very glad I had shared this information with her. She might consider taking a course through Wilmette Institute someday.”

0 comments on “A Variety of Meaningful Conversations: Word Cloud, Fireside, Presentation to a Friend”

1 Pings/Trackbacks for "A Variety of Meaningful Conversations: Word Cloud, Fireside, Presentation to a Friend"