The fourth in a series of free Web Talks marking the twentieth anniversary of the Wilmette Institute will be held on Sunday, April 12. Dr. Moojan Momen, a frequent Wilmette Institute faculty, will discuss “The Re-Creation and Utilization of a Community’s Memories: Shoghi Effendi and Bahá’í History” at 2 p.m. Eastern time (11 a.m. Pacific time, 7 p.m. GMT U.K., 8 p.m. GMT Western Europe). To hear the talk you will need to register before the talk begins to receive a link for joining the Web Talk. We recommend that you join at least five minutes before the talk is scheduled to begin. You will “arrive” in a waiting room and will be “admitted” to the talk when it is about to begin.

In a description of his upcoming talk, Dr. Momen says he will begin by asking a question: “Why did Shoghi Effendi, the head of the Bahá’í Faith, despite having a multitude of other work and responsibilities, devote a very large amount of time to translating and annotating a voluminous history of the Bábí movement, The Dawn-Breakers: Nabil’s Narrative of the Early Days of the Bahá’í Revelation (published in 1932)?” 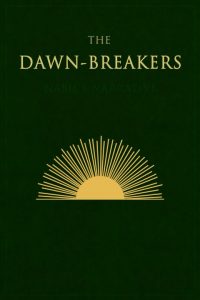 Finally, Dr. Momen will examine “the writings of Shoghi Effendi to bring to light the manner in which he used The Dawn-Breakers, his exhortations to the North American Bahá’í community to study the book, and his creation of the idea that the North American Bahá’ís were the ‘spiritual descendants of the dawn‑breakers.’ This, in turn, created the enthusiasm and readiness among the American Bahá’ís for a series of planned expansions of the Bahá’í Faith in which they were asked to leave their comfortable homes for an often remote ‘pioneer post’ in less developed countries where they would face difficult and uncomfortable circumstances.”

Dr. Momen, who is the lead faculty for the Wilmette Institute course Rediscovering the Dawn-Breakers: The Báb and the Bábí Religion, 1844–53 starting on April 20, is the author of numerous books about the Bahá’í Faith, its historical development, and its relationship to Hinduism, Buddhism, and Islam. He has published scores of articles about Bahá’í subjects and has spoken about the Faith at many academic conferences. He has been an editor of the Bahá’í Encyclopedia Project and is currently an editor of the Bahá’í Studies Review, published in the United Kingdom, where he lives. A medical doctor by profession, Dr. Momen is now retired.

All Wilmette Institute Web Talks are given on Sundays and begin at 2 p.m. East Standard Time; 11 a.m. Pacific; 7 p.m. GMT U.K.; 8 p.m. Western Europe. Talks scheduled for the remainder of 2015 include:

Click here for information on the Web Talks and the speakers.