An exhibit of works by Mark Tobey (1890–1976), titled Mark Tobey: Threading Light is now on display at the Addison Gallery of American Art in Andover, Massachusetts, USA, through March 11. Previously it was on display at the Peggy Guggenheim Collection in Venice, Italy. I was able to visit the American exhibition on November 18 and was immensely impressed by the nearly seventy paintings, covering Tobey’s career from the late 1920s to 1970. I also purchased the beautifully illustrated 208-page book describing the exhibition, Mark Tobey: Threading Light by Debra Bricker-Balken (New York: Skira-Rizzoli, 2017).

The book details important aspects of Tobey’s life: his world travels, especially in Japan and China, where he learned calligraphy and was deeply impressed by the East Asian approach to nature; his refusal to be considered a member of an existing art school, such as the New York School and the Northwest School, both of which became prominent after World War II; his itinerant life, split between Seattle, England, Paris, and, finally, Basel, Switzerland; and the transcendent character of many of his works (which, the book acknowledges, comes from his membership in the Bahá’í Faith). The exhibit’s paintings are accompanied by lengthy explanations, usually drawn from the book.

The exhibit demonstrates the evolution of Tobey’s style and traces his influence on contemporaries such as Jackson Pollack. It starts with some of his early landscapes such as Near Eastern Landscape (1927) and The Middle West (1929), which are abstracts with possible cubist or Surrealist influence. It includes some of his early more “metaphysical” works such as Dem Licht Entgegen (Toward the Light) (1930), which shows figures moving rapturously toward a full moon, and the luminous painting titled Fish in the Moonlight (1934). In Broadway (1935–36) we see a remarkable abstract of one of New York City’s iconic streets pulsing with energy and life, the major elements outlined in white. But it was another eight or nine years before the term “white writing” was coined—no one is sure by whom—to describe the central element of Tobey’s mature style. 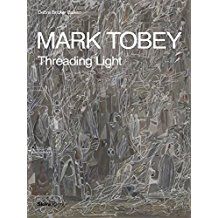 By the mid-1940s, Tobey’s paintings had become so abstract that many were nearly unrecognizable to the unaccustomed eye. For example, New York (1944) consists of a remarkable mass or networks of white lines that perhaps capture the city’s frenetic pace. Yet Gothic (1943) portrays the recurring lines of a Gothic Cathedral in breathtaking and uplifting fashion. The book accompanying the exhibit includes a 1946 painting by Jackson Pollack, Phosphorescence, filled with his own white writing, presumably inspired by Tobey’s work (p. 46). The last paintings in the volume, Coming and Going and Moving Moments (both 1970) fill space with mesmerizing labyrinths of lines, thick and thin, red, white, and black, which seem to represent “higher states of consciousness” (p. 46).

The Addison Gallery is a remarkable jewel of a museum located on the campus of Phillips Academy. Admission is free, and it is open every day of the week except national holidays. The book is available there for $50, but it can be purchased on Amazon for $34.43.

To learn more about Tobey and his “white writing” style of painting, be sure to sign up for Robert Weinberg’s Web Talk on Mark Tobey, “The Awakening of Spirit: Mark Tobey and the Evolution of ‘White Writing.’” It is being held on Sunday, February 11 (2 p.m. EST; 7 p.m. U.K.; 8 p.m. Western European).