A spirit of joy, hope for the future, and optimism pervaded the Bahá’í Days celebration at the United Theological Seminary (UTS) of the Twin Cities (Minneapolis-St. Paul), held in New Brighton, Minnesota, USA, on October 18 and 19. 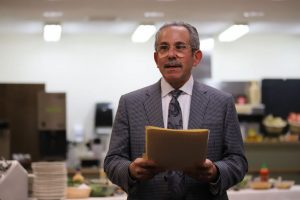 President Lew Zeidner of the United Theological Seminary, who proclaimed October 18, 2017, a day honoring Baha’u’llah and His teachings.

Bahá’í Days was the idea of Dr. Pamela Yetunde, a newly hired Assistant Professor of Pastoral Care and Counseling and Director of United’s Interreligious Chaplaincy. When she heard about the agreement United had signed with the Wilmette Institute that allows the seminary’s students take up to six courses through the Wilmette Institute, she proposed that the articulation agreement be celebrated. With the bicentenary of the Birth of Bahá’u’lláh coming up, she decided that it was logical to set the date close to the Bahá’í Holy Day to be a part of the bicentenary celebrations. Emily Youngdahl Wright, a Bahá’í studying for a degree in interfaith chaplaincy at United, helped with the planning. Dr. Yetunde found speakers for some of the events. All students and faculty at the seminary were invited, as were the Bahá’ís in the Twin Cities.

The Bahá’í Days program began at 10 a.m. on Wednesday, October 18, with a presentation by Dr. Roya Akhavan, director of graduate studies at St. Cloud State University, in Osseo, Minnesota, USA, about “Peace for Our Planet: A New Approach.” Dr. Akhavan spoke about the two parallel processes of construction and destruction that have dominated global life since the nineteenth century. But the destructive events have often triggered constructive ones: World Wars I and II saw the creation of the League of Nations, the United Nations, and the European Union and set the standard that nations can no longer oppress and invade other nations, leading to the decolonization of much of the world in the 1950s and 60s.

Dr. Akhavan also reviewed a very long list of other changes: the abolition of slavery, the spread of voting and democracy, the growing rights of women, the creation of the International Criminal Court, the growing body of enforceable international law, the millennium summit of world leaders, the end of apartheid, and the creation of the euro. She concluded that racism, inequality, and violence have all been delegitimized and are all on their “last stand.” The conversation that followed Dr. Akhavan’s talk focused on why Bahá’ís are optimistic about the future, even if the “last stand” of the negative forces still could drag humanity through terrible trials.

After a break, Dr. Layli Maparyan, Executive Director of the Wellesley Centers for Women and Professor of Africana Studies at Wellesley College, spoke via web video link about “Racism: The Most Challenging Issue—A Bahá’í Perspective.” She quoted Bahá’u’lláh extensively about the oneness of humanity and the innate dignity of every human being; spoke about ‘Abdu’l-Bahá’s efforts to bring about race unity—including his effort to encourage Louis Gregory, an African American from the United States and Louisa Mathew, an English woman from the United Kingdom, to form the first interracial marriage in the American Bahá’í community; and expounded on Shoghi Effendi’s instructions to the American Bahá’í community in The Advent of Divine Justice. The fascinating and powerful presentation triggered questions about Black Lives Matter, the Bahá’í view of Martin Luther King’s campaigns, and the problem of bringing about long-term change. Dr. Maparyan’s presentation and the subsequent question-and-answer session was recorded and is available on United’s YouTube channel.

After a several-hour break for lunch, the audience reconvened at 4 p.m. to watch the new movie about Bahá’u’lláh, Light to the World. It also triggered a lively discussion about the diversity of the Bahá’í community, its worldwide reach, and its future direction. 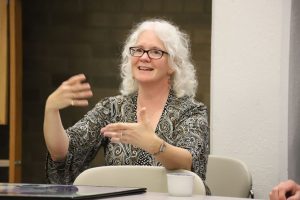 Emily spoke about how her life journey brought her to the realization that she could become a hospital chaplain as a Bahá’í. Robert Stockman and Dean Tan spoke about how the agreement between UTS and the Wilmette Institute came about. Dr. Stockman added information about the effort in the United Kingdom to train Bahá’ís to serve as hospital chaplains and Bahá’í involvement in the interfaith chaplaincy planning efforts in that country. Jessi LeClear Vachta then reviewed United’s various programs and the way Bahá’í Studies could be accommodated in them.

The panel was followed by a dinner for all participants in United’s cafeteria, where President Lew Zeidner read a proclamation designating October 18, 2017, a day “in honor of the memory of the teachings of the Prophet Bahá’u’lláh, and the important and timeless message that He brought all of us.” The evening concluded with a joyful Bahá’í devotional program in the chapel. 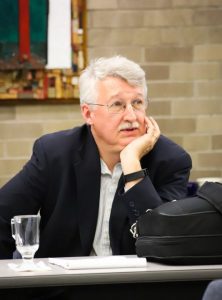 Thursday morning, October 19, Dr. Stockman was invited to speak about “Spiritual, Personal, and Social Transformation from a Bahá’í Perspective” to the course “Introduction to Spiritual and Personal Transformation.” The course was open to the public and a number of Bahá’ís attended as well.

Dr. Stockman focused on independent investigation of truth, the oneness of humanity, and ‘Abdu’l-Bahá’s definition of faith as “conscious knowledge and the practice of good deeds” and their implications for personal and communal transformation. Among the practices and principles that make them possible are the need to study the Word of God daily, obligatory prayer, fasting, Huqúqu’lláh, consultation, and voting without mentioning of names. Closely related to the oneness of humanity is the Bahá’í concept of unity and the corollary of avoiding partisanship. The presentation closed with a discussion of constructive resilience, the basic approach of the Bahá’ís of Iran to persecution, and the related approach that Bahá’ís worldwide are following in their core activities, social action, and public discourse. 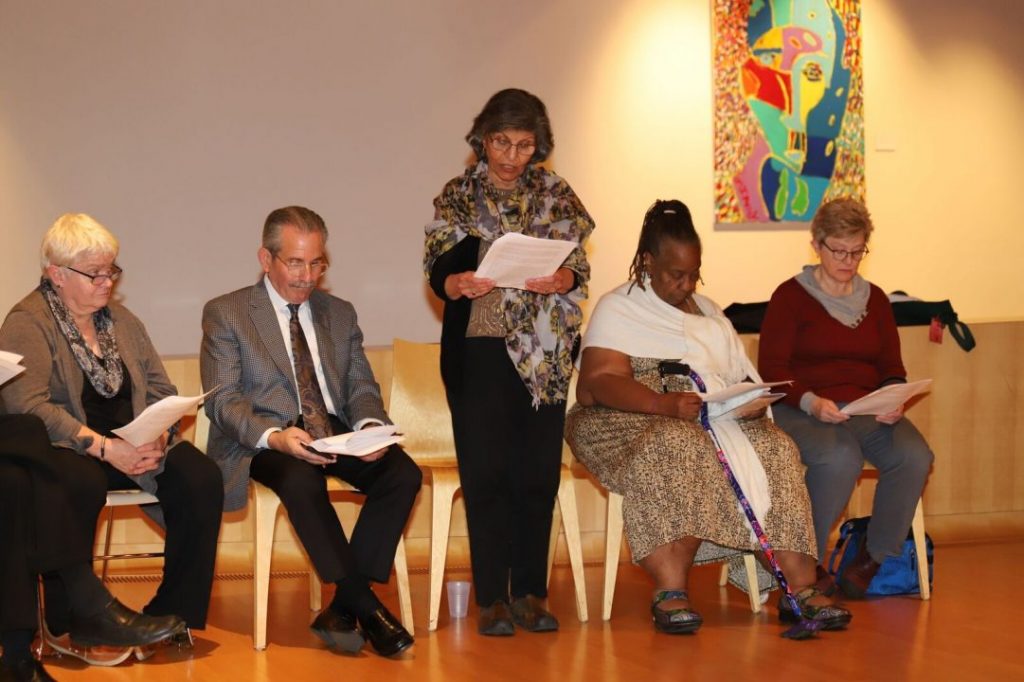 Baháí Days concluded with a “Worship Service in the Bahá’í Tradition” in Bigelow Chapel, which hosts the United Theological Seminary’s weekly worship service every Thursday. Many lingered after the music, readings from Bahá’í sacred texts, and prayers to thank each other for an uplifting and inspiring two days of programs and to say good-bye to new friends.

The results of Bahá’í Days program are several. There is a much closer relationship between the seminary and the Bahá’í communities of greater Minneapolis-St. Paul and much greater appreciation for Bahá’u’lláh’s teachings and the Bahá’í communities’ efforts to actualize them in the world. There is also a deeper understanding about the nature of what Wilmette Institute courses on the Bahá’í Faith contribute to United Theological Seminary students. Several faculty expressed interest in the notion of constructive resilience and a desire to research and write about its principles. The relationship strengthened by the Bahá’í Days program thus promises to continue to deepen and develop.

A link to Dr. Stockman’s presentation will eventually be available. For those who have a Facebook account, there is a photo album of the events available.