Nine Bahá’ís attended the American Academy of Religion (AAR), the leading annual gathering of scholars of religion, held in Atlanta November 21-24. Eight presentations related to the Faith were made to five different audiences.

Ms. Berger also spoke about “Towards a New Discourse on Gender Equality: A Study of the Bahá’í International Community’s Engagement with the United Nations” at a Women’s Roundtable on Sunday focusing on “New Hands Tilling: Emerging Scholars’ Visions of the Future of Feminist Theology.” She participated in a panel discussion at the “Women’s Caucus Business Meeting” on Monday morning. 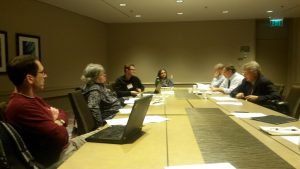 7 of the 10 attendees at the Baha’i Studies Colloquy

Sunday evening, the Bahá’í Studies Colloquy convened to an audience of ten people. Dr. Susan Maneck served as chair. Dr. Christopher White of Vassar College spoke about “Theories of Cognition, Attention, and Embodiment and the Bahá’í Obligatory Prayers.” He examined research about the importance of bodily motions and engagement in remembering and appreciating truths, work that applies to Islamic and Bahá’í obligatory prayers and some Buddhist meditation practices.

Dr. Loni Bramson, a professor at American Public University System, explored “American Bahá’í Race Relations Work in the 1920s and 1930s: A Means to Develop the Bahá’í Administrative Order in the United States.” She reviewed the race unity efforts that were conducted by the Bahá’ís during the era when local spiritual assemblies were being established and hypothesized that the work of organizing and conducting the conferences was an important factor in strengthening and developing these nascent institutions.

Dr. Mikhail Sergeev, a professor at the University of the Arts in Philadelphia, then spoke about “Concepts of the Immortality of the Soul and Reincarnation in the Writings of ‘Abdu’l-Bahá.” He analyzed the proofs presented in various texts by `Abdu’l-Bahá about the immortality of the soul, noting that while some of them could also be found in Plato, most were original and therefore constituted important contributions to global philosophical thought about the afterlife.

Finally, Dr. Mike McMullen, a sociologist at University of Houston Clear Lake, offered “A Snapshot of Baha’i Programs for Youth and Young Adults: Data from the FACT 2015 Survey.” He summarized a recent survey of local spiritual assemblies—almost half of which responded—of their programs for young adults. The survey showed strong levels of vitality in Bahá’í communities compared to many Christian congregations, which on average are shrinking in size and losing young people in spite of numerous programs to retain them.

The presentations were followed by a business meeting chaired by Dr. Robert Stockman. There has been a Bahá’í presence at the American Academy of Religion since about 1984, but most of that time the Bahá’í program has been an “additional meeting” rather than a regular part of the AAR. The business meeting decided to apply for “group” status within the AAR so that its programs would be featured more prominently in the program book and would be seen as a regular part of the discipline of religious studies. Two co-chairs, Robert Stockman and Susan Maneck, were chosen (groups usually have two co-chairs to spread the workload).

The group chose the theme of “The Most Challenging Issue: Race and Religion” to serve as the focus of next year’s panel. It is hoped the papers can be collected and edited for publication in a peer-reviewed academic journal. The Bahá’í Studies Group plans to focus on themes relevant to public discourse and will seek to include many people whose research focuses on other communities, but nevertheless illumines the development of the Bahá’í community in some way.

The Bahá’í presence at the AAR was rounded out by a display of about fifty scholarly works and authoritative texts in the exhibit hall, where over 100 publishers presented tens of thousands of new books and journals on religious studies. Many informal dialogues about the Bahá’í Faith occurred at the booth and free introductory literature was provided.

Ten thousand people—professors, graduate students, journalists, and clergy—attended this year’s joint meeting of the American Academy of Religion and Society for Biblical Literature. Most came from North America, but some traveled from all the other inhabited continents. Several thousand presentations were given, mostly in hundreds of simultaneous sessions. In addition, there were films with discussion, tours of religious sites, the construction of a Tibetan Buddhist sand mandala painting, scores of banquets and receptions, the exhibit hall, and the employment center, where job interviews for university teaching positions were conducted. Next year’s AAR will be held in San Antonio, Texas, November 19-22, 2016.

Tagged with: American Academy of Religion