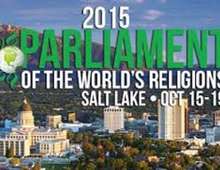 The fifth Parliament of the World’s Religions was held in Salt Lake City, Utah, October 15–19, 2015. Among the 9,806 attendees were a hundred or more Bahá’ís, including several Wilmette Institute faculty members. The theme of the Parliament was “Reclaiming the Heart of our Humanity: Working Together for a World of Compassion, Peace, Justice and Sustainability.”

The Parliament offered themes to focus the various workshops, presentations, and plenary sessions in order to channel interfaith interactions in directions conducive to the betterment of the world. The themes were:

The suffering and persecution of the Bahá’ís of Iran was mentioned in various plenaries and sessions. The Bahá’í Office of Public Affairs prepared a web page with statements about these issues: http://publicaffairs.bahai.us/parliament/ .

The Wilmette Institute had a display in the Bahá’í “Faith Space,” one of twelve designated spaces at the Parliament where devotions could be held and like-minded people could gather. The Bahá’í meeting room was on the conference main corridor and was constantly full of Bahá’ís visiting with each other and with new friends from all over the world. So many came to the devotional gatherings held there that the displays had to be moved against the walls to accommodate the crowd.

Ted Brownstein, who teaches courses on Judaism, Christianity, the Hebrew Bible, the New Testament, and interfaith dialogue for the Wilmette Institute and who is a Parliament Ambassador. He volunteered throughout the event as a guide and staffed an information booth.

Trip Barthel (who teaches the Dynamic Consultation course) and Shamil Fattakhov (a member of the National Spiritual Assembly of the Russian Federation) hosted the 9 Facets Publishing exhibit with author Cindy Savage.

Sovaida Ma’ani Ewing, who teaches Building a World Federation: The Key to Solving Our Global Crises, gave two presentations on the same topic and was a panelist in “Pathways to Peace: Different Perspectives.” 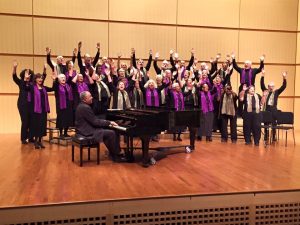 A Bahá’í Choir was assembled for the Parliament, under the direction of Van Gilmer. It performed three times: once at the Salt Palace Convention Center, once in a concert of sacred music in the Salt Lake City Tabernacle (where the Mormon Tabernacle Choir sings), and once at a post-Parliament event at Westminster College. Candace Hill, the Wilmette Institute’s course developer, sang in the choir, as well as provided information about the Wilmette Institute to countless interested people.

Many other Bahá’ís presented in sessions and arts events or were deeply involved in planning, coordinating, and hosting the Parliament. Bahá’ís were also members of sponsoring organizations such as Rotary International and the United Religions Initiative.

Bahá’í youth served as volunteers for the Parliament as well as answering questions at the Bahá’í Faith Space. The Bahá’í communities in the Salt Lake Valley hosted a luncheon for Bahá’í visitors at the Rio Grande railway station in Salt Lake City where ‘Abdu’l-Bahá arrived in 1912. The railway station has been beautifully restored and is now the home of several state agencies.

At least one presentation included a mention of Bahá’í history. Dr. Allison Stokes, the Founding Director of the Women’s Interfaith Institute in Rochester, New York, included the story of Tahirih in her presentation on “Remembering Our Foremothers: Pioneers in the Interfaith Movement—Chicago 1893.”

The Board of Trustees announced that the next parliament would meet in two years but did not name the city. The world’s first parliament of religions occurred in Chicago in 1893. The second one was the revival of the parliament movement, held again in Chicago, in 1993. The parliament has since met in Cape Town, South Africa, in 1999; Barcelona, Spain, in 2004; and Melbourne, Australia, in 2009.