Three months after Chahbaz Azarkadeh finished the Wilmette Institute course Indigenous Perspectives on the Sacred 2018, the Wilmette Institute staff wrote to ask him how he was applying what he had learned in the course. His reply was short, but it brought to the fore the fact that controversial statues are not the purview of the American South alone. This is what Chahbaz wrote: 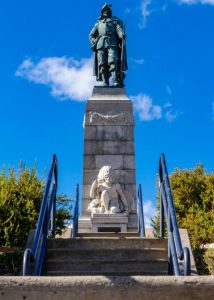 A monument to Samuel de Champlain, who established the City of Quebec and New France in North America

Here in Plattsburgh in northern New York—not far from Mohawk nation—there has been a discussion within the community regarding a monument and the preservation of Mohawk honor and dignity, where it was possible for me to be present and hopefully contribute. Here is a link to an article that appeared in Cardinal Points, the student newspaper of the State University of New York, Plattsburgh, together with a photograph of the monument.

At issue is a 100-year-old monument honoring Samuel de Champlain—in the heart of what was once the home of the Mohawk nation. Champlain is best known for establishing New France on the North American continent and the city of Quebec. During the month-long Plattsburgh Big Read Festival in April 2018, which highlighted sexual-assault awareness, Native-American culture, literacy, community, and the joy of reading, a panel discussion examined the place of the monument in “remembering Native Americans.” There are two objections. One is that the Indian on the monument is neither Mohawk nor Iroquois but rather more like a Plains Indian of the Dakotas. The other is that Champlain, standing, tops the monument, while the generic, stereotypical Native American kneels some distance below Champlain. At the end of the panel discussion, those attending exchanged email addresses so that they could form a committee that might propose changes to the monument. Chahbaz continues o be part of the discussion.