As a result of taking the Wilmette Institute course Indigenous Perspectives on the Sacred, three Indianapolis Bahá’ís—Victor Chaney, Stephanie Charvin, and Debbie Wittman—organized an evening of storytelling and music on August 30 with some of the Native Americans in their area.

The three Bahá’ís had been meeting and talking about connecting with the Native American population in Indiana before they took the course.  They were inspired by `Abdu’l-Bahá’s  words, “Attach great importance to the indigenous population of America. . . . should they be educated and guided, there can be no doubt that they will becomes so illumined as to enlighten the whole world.”

Vic, who is Cherokee, pointed out that first they needed to “attach great importance” to them. Indiana has no reservations, but members of many nations live there, mostly concentrated in Marion County where Indianapolis is located.  Many never talk about their Indian heritage.

The three were guided by the content of the Wilmette Institute course. They read books and viewed documentaries suggested in the course. They attended local meetings and often the material they had just studied helped them to understand references to such topics as boarding schools, the destruction of native culture, and the systematic removal of rights from indigenous people. In Indiana history, the indigenous nations are mentioned in the past tense.

They understood why Native American Indians would be slow to trust. As Shoghi Effendi’s secretary noted, “. . .they may well look on us with the evils of our civilization, with its moral corruption, its ruinous wars, its hypocrisy and conceit, as people who merit watching with both suspicion and contempt.” (From a letter dated September 21, 1951, written on behalf of Shoghi Effendi to the Comité Nacional de Enseñanza Bahá’í para los Indígenas de Sur América, Lights of Guidance, #1777, p. 524.)

Over the last year they observed the many ways the Native American Indian culture and life mirrors spiritual teachings brought by Bahá’u’lláh. Qualities such as truthfulness, generosity, caring for their communities, freedom from religious prejudice, a reverence for the planet and all its inhabitants, inspired them.

The evening of storytelling and music was held at the Indianapolis Bahá’í Center on August 30. Ongoing consultation and prayers during the months preceding the meeting were part of the preparation. The main hall was set up with large circle of chairs and a center piece of candles of different sizes representing children, youth, adults, and elders. Sunflowers, wildflowers and herb bouquets were placed around the Bahá’í Center. 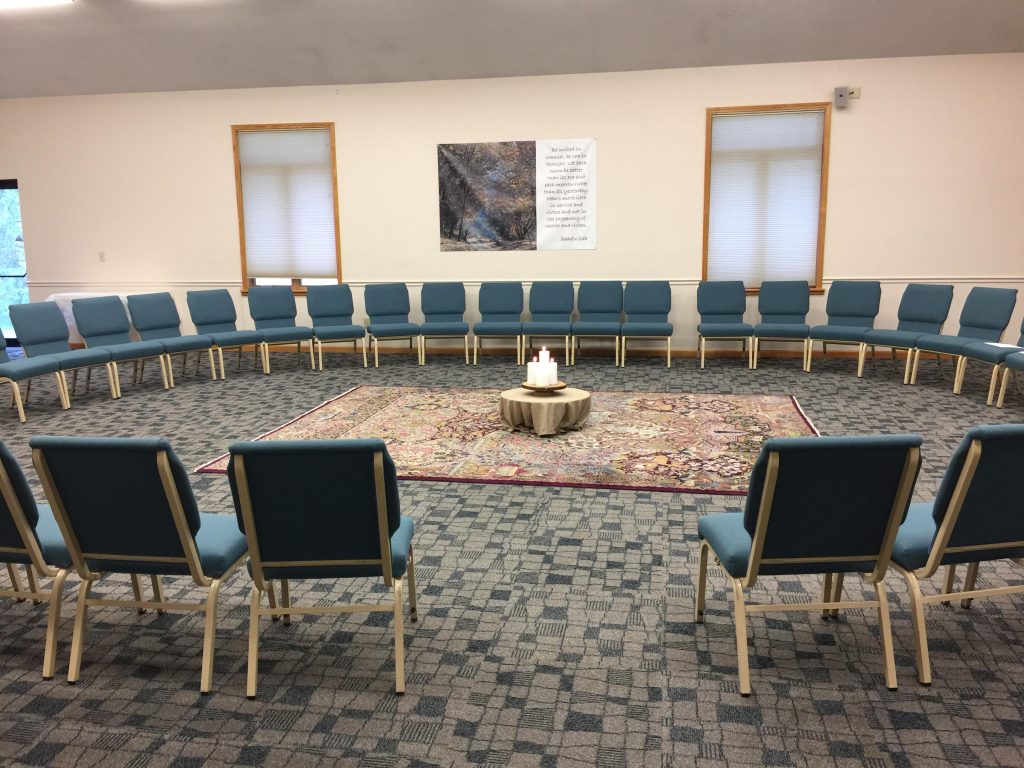 The evening began when everyone was asked, in a friendly manner, to turn off phones, and not to record stories or take photos without permission. Melissa Williams, Director of the Native American Indian Affairs Commission, had told Stephanie that often indigenous stories and songs had been recorded and then sold without permission.

The speakers shared from their hearts; no one was paid.

Vic Chaney, a Bahá’í Cherokee, welcomed everyone and shared a Lakota prayer.

Eric Green, a Bahá’í African American with indigenous heritage, shared a prayer for humanity. Stephanie and Deb sang a short prayer for the departed, in honor of all our ancestors.

The first speaker, who was Apache, blessed the meeting. He told a creation story, speaking of how everything is alive, and the reverence indigenous people have for the earth and all life. He spoke of the heartbeat of the drum and how we are all related.

The second speaker was a local Bahá’í, who had recently mentioned that she was Apache. She had left the reservation when she was 3. She said she would like to help with the storytelling, but the only story she knew was one about her grandfather. He had been sent away as a young child with his brothers to a missionary boarding school. It was very hard, but they persevered and grew up to have good lives, in spite of the cruel ways they were treated “to take the Indian out of them.”

At the end of her story, the first speaker rose up. “I have something to say. All that she says is true, and there is more.” He talked about the history of the oppression of Apaches in Texas and what all of the Indian nations had endured. Then he played the water drum and chanted an Apache prayer of healing for our Bahá’í friend. He translated the words of healing into English so everyone would understand.

Vic Chaney and his wife, Kathleen, sang three songs: “The Anthem of the American Indian,” “I am Open and I am Willing,” and “Welcome Emigrante” by Buffy Saint Marie.

Attending the evening were 51 men, women, and children: Apache, Cherokee, Black, White, a family from the Philippines–Bahá’ís and friends. It felt like one community.

A European American with three African American children asked if he could speak. He underlined all that had been said about our being one and thanked everyone. Just a week before he had driven past the barbershop of Bob Moore, an African American Bahá’í. It was night, but the lights were on in the shop. Bob cut the man’s hair and gave him an invitation to the meeting.

When a closing prayer was requested, one of this man’s children stood up and spoke a prayer from the heart.

Refreshments were served. Everyone mingled, thanked the speakers, and had conversations. Many people asked when another meeting like this would be held.

The meeting was not intended to be a devotional, but as Stephanie wrote, “This is the spirit that we wanted to transmit to the participants.  ‘Sharing’ was the main word we used. We never really talked about having a devotional. I think we can say that people experienced a very sacred moment and everyone was showing reverence.”

Thank you to the Wilmette Institute for the course Indigenous Approaches to the Sacred, which continues to impact so many lives.