Dedication of the Bahá’í House of Worship for South America

When I first saw the design for the Mother Temple of South America some years ago, my first response was, “It’s a jellyfish!” This was intended as an affectionate compliment, to go along with the description of the European continental House of Worship as a “cheese grater,” of another one as “egg,” yet another as “baby’s first shoe,” and still yet another as “God’s little lemon squeezer.”

The Architect and His Design for the Temple. The thing is, I was not completely wrong. In his talk at the conference held in the Movistar Arena for those attending the dedication ceremonies in Santiago, Chile, architect Siamak Hariri explained that he used images from nature in his design for this magnificent Mashriqu’l-Adhkár (the Dawning-Place of the Mention of God).

In his talk, Hariri described the organic nature of some of the shapes that inspired him, from a fuzzy Japanese basket to mottled light through a canopy of trees, to “Structured Light,” one of the “white writing” paintings of Mark Tobey. Starting with the concept of “embodied light”— pillars of light—and inspired by the way seedlings turn towards the light as they grow, Hariri developed his design to encapsulate both movement and stillness —the movement of the cosmos, of the galaxy, of everything, as everything is in motion. The outside cladding of the House of Worship is glass made from medical petri dishes and test tubes. Really! The inside cladding is the most marvelous marble from Portugal. Sandwiched between is the steel frame. You can hear Hariri’s description of all this at https://www.youtube.com/watch?v=I8hyB8jeKd0. He does not, in fact, mention jellyfish.

Arrival, October 12. Our three-generation family was hugely excited to be among the five thousand or so Bahá’ís from all over the world who attended the opening celebrations of the House of Worship. As we flew down the long spine of the snow-topped Andes in the early morning of October 12, we were glued to the airplane windows hoping to catch our first sight of the Temple. We did not see it then but were thrilled to be able to see it from our airbnb flat—well, we could if we went out onto the fire escape, stretched our heads out of the staircase, looked to the left, and peered across the whole of foggy Santiago. Still, we did get our first look at it—and a picture.

Over the next four days we had such an array of experiences and emotions. Only those serving in particular capacities were able to visit the House of Worship before one’s designated hour. We were so close and yet frustratingly so far. The day we arrived we went to get our service assignments, eventually being directed to the Bahá’í Center. Not speaking Spanish and having no clear idea where the Center was, we found ourselves wandering through suburban streets until I chanced upon two American Bahá’ís who are also members of ebbf (ethical business for a better future). They had just come from the Center and were able to direct us to it.

This encounter was typical of the whole event: meeting people one has known for decades and has not seen in years, hugging, exchanging a few words and then moving on to the next chance encounter. With five thousand people coming from over 110 countries, movement at the conference center was, delightfully, very slow: it took us nearly two hours to see a small exhibition of the development of the Bahá’í Faith in South America as we met so many old friends—and quite a few new ones—doing the same. You can get a flavor of this here: https://vimeo.com/187437900.

October 13, Official Dedication. The next day, October 13, was the official dedication and opening of the Temple for public worship. International Teaching Center Counselor Antonella Demonte, representatives of National Spiritual Assemblies in the Americas, Chilean dignitaries, and civic leaders were among the guests invited to attend this special occasion. They were received in a marquee set up a short distance from the House of Worship where they were welcomed and addressed on the significance of the Mashriqu’l-Adhkár before ascending the stairs to the House of Worship for a devotional service. The program was streamed live around the world—but we could not receive it ourselves until we returned home. You have probably already seen it, but here it is in case you have not: http://news.bahai.org/story/1128

October 14, Conference Begins. On October 14 the program at the Movistar arena began. What an amazing feeling, to be among five thousand Bahá’ís celebrating the achievements of the Bahá’í Faith in South America. The program particularly honored the indigenous peoples, who have been the most receptive of the continent’s populations to the message of Bahá’u’lláh. We listened to the translations through radio earphones—okay, they did not work brilliantly on that first day, and many of us listened to the live feed on our mobile phones as we watched (and danced to!) the performers from our seats in the arena—you can see what we saw here: https://www.youtube.com/watch?v=Uomepzr7N7A. The play The White Roses, about Martha Root, Leonora Armstrong, and May Maxwell, can be found at 36.34 minutes, the talk of Hooper Dunbar at 1:39:50. And the music! And the dancing! In the audience!

Watch the second day here: https://www.youtube.com/watch?v=xVphVeFIDko. Wilmette Institute faculty Arthur Lyon Dahl made a presentation on this day on behalf of the Swiss National Assembly.

October 15, Our Visit to the House of Worship. The Temple is 30 meters [100 feet] wide and 30 meters tall and holds about five hundred people. The program was arranged so that, over two days, ten groups of five hundred were to be taken by bus to the Temple from the Arena to attend one of the dedication ceremonies. On the afternoon of October 15, our family was taken up the mountain to the House of Worship. 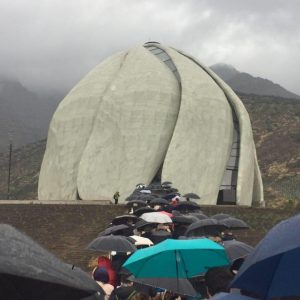 While the sun shone in the morning, by the time we arrived it was pouring rain. My first picture of the Temple was through the plastic window of the marquee, now used as a holding bay while we waited for the first group to emerge from the Temple (we were group three). We found out why they were taking so long: the Universal House of Justice had arranged for pictures of Bahá’u’lláh and the Báb to be shown to the Bahá’ís at the close of every devotional program—and no one wanted to hurry this unexpected and spiritually uplifting experience.

There are no words to describe entering the House of Worship for the first time. I can only repeat what architect Hariri envisaged the Temple to be: an eye to the heavens. The devotional program was brief, spiritually refreshing, and soaring. It was a privilege to be there with our grandchildren, the sixth generation of Bahá’ís on my side of the family.

October 16, Conference Ends. October 16, the last day of the conference was equally marvelous. You can see the whole program here: https://www.youtube.com/watch?v=fftarisHIi0. Dr. Arbab is at 13.09 minutes. 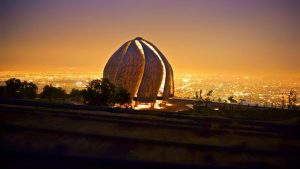 A Special Bonus. For two days after the close of the conference, the Temple was open from dawn until very late for those attending the ceremonies to make private visits. The six of us traveled up in the late afternoon to see the House of Worship at sunset and at night. It was still pouring rain as we arrived.

And then, just at sunset, the clouds parted across the city of Santiago. The sun shone red through the sliver of sky. And the beautiful Mashriqu’l-Adhkár of South America was transformed into a glowing golden eye gazing upward to the heavens.