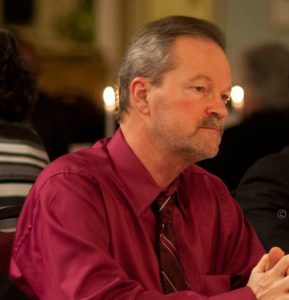 The fifth in a series of free Web Talks marking the twentieth anniversary of the Wilmette Institute will be held on Sunday, May 3. Dr. Christopher Buck will discuss “God and Apple Pie: Religious Myths and Visions of America” at 2 p.m. Eastern time (11 a.m. Pacific time, 7 p.m. GMT U.K., 8 p.m. Western Europe). To hear the talk you will need to register before the talk begins to receive a link for joining the Web Talk. We recommend that you join at least five minutes before the talk is scheduled to begin. You will “arrive” in a waiting room and will be “admitted” to the talk when it is about to begin.

Dr. Buck goes on to say that “It is not necessary to disparage other religions in favor of Christianity, Buddhism, or the Bahá’í Faith. . . . On the contrary, it is good to find common ground,” which is “one important goal of interreligious dialogue.” For a “prerequisite to interfaith discourse is becoming knowledgeable, both about one’s own faith and the faith of others. . . .” Another prerequisite is “convergence,” not “conversion.” Dr. Buck asks, “Can we, as Americans, agree on what America can, or should, stand for?”

In his talk, as in his book, Dr. Buck offers a handbook that treats “each of the religions even-handedly,” an approach that allows for engaging productively in public discourses about American society

Dr. Buck, who holds a doctorate in the study of religion and a law degree, is an attorney in Pennsylvania and an independent scholar. He has taught at Michigan State University, Quincy University, Milliken University, and Carleton University. He has written chapters for a number of books, encyclopedia and journal articles, and a number of books, including Religious Myths and Visions of America: How Minority Faiths Redefined American’s World Role; Alain Locke: Faith and Philosophy; Paradise and Paradigm: Key Symbols in Persian Christianity and the Bahá’í Faith; and Symbol and Secret: Qur’an Commentary in Bahá’u’lláh’s Kitáb-i-Íqán.

All Wilmette Institute Web Talks are given on Sundays and begin at 2 p.m. Eastern Standard Time; 11 a.m. Pacific; 7 p.m. GMT U.K.; 8 p.m. Western Europe. Talks scheduled for the remainder of 2015 include:

Click here for information on the Web Talks and the speakers