A History Lesson and Goals. If an organization were a human generation, ebbf would be a Millennial. Conceived during the closing years of the Cold War at a gathering of European Bahá’í business (mostly) men, it was born less than a year after the Berlin Wall was formally opened in 1989. By the time the Wall was completely demolished in 1992, ebbf had already held its first annual conference, elected a governing board of five, published four monographs—including the flagship Emerging Values for a Global Economy—and launched its first strategic development and outreach program. The members wanted to concentrate on two main themes: the environment and what was at the time called Eastern Europe. 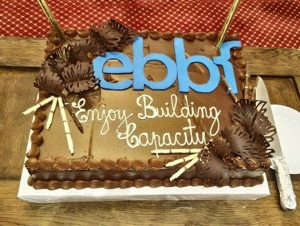 Eastern Europe comprised all those countries that had been behind the Iron Curtain of communism (on the one hand, if you ARE a Millennial, you probably have no idea what I am talking about, as it is all pre-history to you; baby boomers like me, on the other hand, cannot remember that forty-five-year era when half of Europe was not yet communist and not yet in the European Union). The opportunity to reach out to spiritually starved people with the teachings of Bahá’u’lláh was compelling. The Bahá’ís themselves were engaged in a two-year plan to do just that; ebbf also looked to Eastern Europe to bring Bahá’í-inspired ethical values to the businesses just coming to terms with the collapse of the economic structure they had always known.

A Hand Up from the Romanians! For a decade, ebbf co-hosted business conferences in Bulgaria. But its long-held dream of holding its annual conference in the eastern part of Europe was elusive. And then came the Romanians!

Enthused by the ebbf conferences they attended, new ebbf members from Romania offered to take on the challenge of organizing and hosting the October 2016 ebbf international learning event in Bucharest. It was the perfect team to reflect the conference theme: “Building Capacity: Understanding and Developing the Latent Talent in People and Organizations to Enable Adaptive and Meaningful Workplaces Fit for the 21st Century” (I am not sure of the capacity of the Romanian language to translate this mouthful of a title, however—oh, apparently it can! “Construirea capacitatii—eliberarea si dezvoltarea talentului potential al individului sau/si a organizatiei”).

Two Learning Events and Hip Hop Meditation. If ebbf is a Millennial, so are its international learn events. I don’t suppose many business conferences include hip hop meditation. You can join the session led by Jaleh Zandieh here and watch her analysis of the ebbf Bucharest event here.

Not content to host one event, the Romanian team organized a pre-conference conference to introduce ebbf (NOT the Emirates Body Building Federation, by the way, but Ethical Business Building the Future) to over two hundred university and high school students as well as local business people. A Moral Leadership Workshop was cohosted by UMANager (a Romanian organization supporting the concept of ethics in business from the desire to increase the confidence of young entrepreneurs in the Romanian business environment) with the support of the Center for Oratory and Debate at the Romanian American University. The innovative surprise of the evening? Giving away five tickets for the ebbf Conference to those whose names were drawn from a bowl. 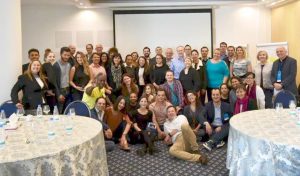 And then to the conference itself. The most noticeable characteristic of this event was that about 50 percent of those attending were, you knew it all along, Millennials and Generation Zs. And about 50 percent of those were women. One of the people who won a ticket to the learn event, a young man of sixteen, asked if he could bring some of his high-school friends—and they came! What intelligent, analytical, curiosity-driven, breath-of-fresh-unpolluted-air people they turned out to be. They injected energy, hope, and spiritual consciousness into a learn event already vibrating with its vision of an ethical future.

What did we learn about building capacity from our amazing array of keynoters and learnshop facilitators?

Find all the keynotes here; look at the side bar on the right of your screen—the ones from Bucharest have a yellow band across the middle). And what were the key concepts that emerged from this inspiring ebbf learning experience? Find out here.

Register for the May 2017 Learn Event. Intrigued by this event? Are you a Millennial or Generation Z? Baby boomer? Why not join ebbf at its next international learn event, in Geneva, May 4–7, 2017, “Ethical Business Building the Future: Beyond Diversity.” Register here. Can you really afford to miss our hip hop meditation?