In February 2018, the Wilmette Institute hosted its first course on Racism in America: The Most Vital and Challenging Issue. The topic was so popular that the course was oversubscribed (60 participants), and it was offered again in June 2019 with 56 participants. The course’s faculty, two of whom were new to the Wilmette Institute, invited two of the participants from the June 2018 course to join the 2019 course as discussants. Discussants are persons with special experience or expertise in the course topic who assist the faculty by contributing to the course forums and enriching the dialogue.

Shaping an Ever-Changing Course on Racism. One outcome of the consultation among the faculty and discussants before completing the units for the 2019 iteration of the Racism in America course was the suggestion that materials on the concepts of “white fragility” and “microaggression” be added to the course’s readings. As a result, they decided to include in one of the units readings from Robin DiAngelo’s book White Fragility: Why It’s So Hard for White People to Talk About Racism. A second addition was Val Day-Sanchez’s May 2018 TEDx Talk “Silence is Killing Us” (8:40).

Defining Microaggession and White Fragility. The term microaggression was coined by psychiatrist and Harvard University professor Chester M. Pierce in 1970 to describe insults and dismissals that he regularly witnessed non-black Americans inflicting on African Americans. According to Day-Sanchez, microaggression is

a term which describes passing comments or behaviors which communicate derogatory, discriminatory or prejudicial insults toward an individual or group. These comments or behaviors are often unintentional, and are called micro even though their impact is much larger and long lasting. Microaggressions are those stinging comments that are often argued to be jokes. They are small things that remind marginalized group members that we do not in fact belong. They are a form of racism and discrimination that have become popular because they are difficult to “prove.” They are comments like, “Wow! You speak really good English,” “You don’t even act like you’re a minority,” “Where are you really from?” or “I don’t even see color.”

a state in which even a minimum amount of racial stress becomes intolerable, triggering a range of defensive moves. These moves include the outward display of emotions such as anger, fear, and guilt, and behaviors such as argumentation, silence, and leaving the stress-inducing situation. These behaviors, in turn, function to reinstate white racial equilibrium. (Robin DiAngelo, “White Fragility,” International Journal of Critical Pedagogy [3, no. 3 (2011): 57])

In “Additional Tips for a Productive Discussion,” p. 4, in her Reading Guide for her book entitled White Fragility: Why It’s So Hard For White People To Talk About Racism, DiAngelo goes on to explain that

The primary goal for white people working to understand racism is not to learn how racism impacts people of color. The primary goal is to recognize how the system of racism shapes our lives, how we uphold that system, and how we might interrupt it.

Adding a Zoom Workshop to the Racism Course. In addition to adding readings from DiAngelo’s book White Fragility and Day-Sanchez’s Tedx Talk to the Racism course, the faculty decided to reach out to Day-Sanchez to see if she would be willing to conduct an online workshop for the course participants. They hoped she would explain more about the relatively new concept of microaggression and how to address the problem in constructive ways—in other words, how can we usefully “interrupt” (a term DiAngelo uses in her Reading Guide) this type of racism as we encounter it in our daily lives? 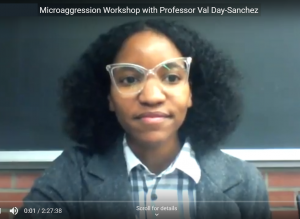 Day-Sanchez is an Assistant Professor of Communications and an Equity and Inclusion Facilitator at Central New Mexico Community College in Albuqurque, New Mexico, USA. She is an author, activist, and podcast cohost as well as a producer and director who enjoys telling diverse stories about diverse individuals. When she published The Only Black Girl in the Room: A Memoir, one reader described the essays as “heartbreaking, poignant and timely as one finds themselves identifying with what it means to be black in America, even when they have ‘beaten the odds.’” Day-Sanchez had never done on online workshop before but agreed to adjust her face-to-face workshop on microaggression to an online format. It took her no time at all to learn how to use Zoom videoconferencing technology.

The Microaggression Workshop. About a quarter of the participants in the Racism course took part in the workshop, which ran for two and a half hours (thirty minutes longer than the scheduled time). It covered the most common examples of microaggressions and provided:

One of the many highlights of the workshop included a discussion about the role of nonverbal communication and code-switching. According to the Oxford English Dictionary, code-switching in linguistic terms is the “practice of alternating between two or more languages or varieties of language in conversation.” But the term has expanded to cover any situation in which people find themselves switching from one accepted vocabulary, cadence, style, or set of rules to another. Code-switching can be a response to microaggression when a marginalized person feels forced to change his or her language/accent, dress, or personal mannerisms in order to “fit in” with the standards of the non-marginalized persons with whom they are communicating.

Another highlight of the workshop was the realization that, although each individual microaggression experienced by a marginalized person may be seen as something trivial, when you add them all up, they have a significant effect, even although the marginalized person may not acknowledge the effect if asked about it. When a person belongs to more than one marginalized group (non-white, female, too young, too old, first language not English, non-Christian) the constant pressure to be someone other than who they are can be devastating. As DiAngelo affirms in the Reading Guide to her book White Fragility:

We have a deep interest in denying the forms of oppression that benefit us. We may also have an interest in denying forms of oppression that harm us. For example, people of color can deny the existence of racism and even support its structures. This denial may keep them from feeling overwhelmed by the daily slights or protect them from the penalties of confronting white people on racism. However, regardless of the reason, this denial still benefits whites at the group level, not people of color. 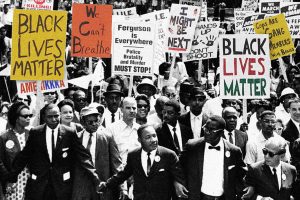 Yet another highlight was this take-away: The breakthrough moment for many people who have been lingering in denial that racism in the twenty-first century is real is the recognition that, although not in a marginalized group, they too have experienced microaggression due to some disability or difference. The very old or sick, the hard of hearing, the visually challenged, the mentally ill, the parents of the autistic or disabled, the stutterer, the obese, the skinny, the un-pretty, the awkward, the technologically challenged—all have experienced microaggression. The human race is so diverse that it is hard to find someone who has never been in a situation in which they have been the recipient of microaggression.

Because of the sensitive and candid consultation in the workshop, the workshop proceedings and materials will not be published. There is, however, much that can be learned by self-study on the topic of racism. Below is a list of some of the publications and websites used as resources in the course Racism in America: The Most Vital and Challenging Issue. To get the most benefit from these resources, keep checking the monthly eNewsletter for the dates when the next course on Racism in America will be offered. Then sign up. (Several learners have said that everyone should take this course.)

Race—The Power of an Illusion
(PBS, online companion to a documentary series about race in society, science, and history)
http://www.pbs.org/race/000_General/000_00-Home.htm

White Fragility: Why It’s So Hard for White People to Talk About Racism by Robin DiAngelo
https://robindiangelo.com/