I have been a Bahá’í since 1966 and have served on various institutions, including Local Spiritual Assemblies, the Auxiliary Board (for Protection), and the National Spiritual Assembly of the UK. In the early 1970s, I trained as a high school teacher of history and English and taught in state schools (public schools in US terminology), selective and non-selective, for ten years.

After deciding I needed a change, I left the classroom in the early 1980s to set up and run an alcoholism counseling and education center, funded by social services and the health board. At that point my wife and I had been pioneering in the Shetland Islands (the most northerly of the British Isles) since 1974. In 1984, we returned to the south of England and I went back to university. After completing a second Bachelor’s I was invited to manage George Ronald, the well-known publisher of Bahá’í books in Oxford. Thereafter, I worked as project officer in the UK Bahá’í National Office, and then as the editor of the UK Bahá’í Journal. I was first elected to the UK National Spiritual Assembly. I set up a small editorial business and then, in 1998, I was elected to serve as Secretary of the National Spiritual Assembly. From 2005 to 2007 I served as Secretary of External Affairs. I have now retired from full-time employment.

Over the years I have been deeply involved in interfaith and multi-faith activity, including chairing a number of organizations. I have also served on various UK government advisory bodies, particularly with respect to equality, diversity and human rights. In 2011 I was honored for my services to interfaith relations and to the Bahá’í Faith by being appointed an Officer of the Order of the British Empire (OBE) by Her Majesty Queen Elizabeth II.

I have continued to teach and lecture on an occasional basis, including at Bahá’í summer schools, and to students at the London centers of two American universities (Arcadia and Syracuse). I was also involved in the training of Bahá’ís as healthcare chaplaincy volunteers. 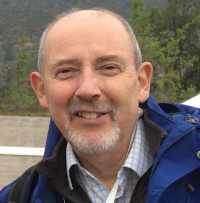