Department of Religion, Theology, and Philosophy

I have had a lifelong drive to explore and create.  In 1972 Richard Fool Bull the foremost exemplar and practitioner of the Indigenous North American flute urged me to take up and perpetuate this unique and precious heritage that has evolved and developed here in this continent from time immemorial.  It was through him and many other elders that I caught a glimpse of the dreams, hopes and visions that have propelled our ancestors.  Those elders have departed but their spirit lives through the traditions they have passed on to us and comes alive when we actively engage younger generations in their perpetuation.  We can realize the fulfillment of those dreams on their behalf. When I first started with the flute I wanted to develop a repertoire.  Fortunately when I started in the mid 1970’s many of the older generation had a great knowledge of the unique vocal genre from which the flute melodies are derived and I was able to obtain a vast reservoir of this special genre. The current popularized “Native American flute” was invented in 1980 for commercial purposes in that it uses the well-known “melodic” or minor pentatonic scale and lends itself to improvisation.  I differentiate that from the original Indigenous North American flute, which is much more versatile and has a wider range of notes and is perfectly adapted to play not only chromatic, diatonic and pentatonic scales but its note progression is able to capture the authentic Indigenous North American musical esthetic.  Simultaneous with acquiring flute music, I also received the gift of the hoop dance, and learned that it is a choreographed prayer which invokes unity, beauty, holiness and is used to draw the people into this timeless, placeless realm.

Indigenous North American tradition lacks the concept of arts as entertainment.  As an Indigenous North American residing and performing mostly in North America it is challenging to operate in a dominant culture with values and esthetics so diametrically different to the millennia old spiritual heritage of this land.  At this late point in my career, it is enriching to present at school settings conducive to educating around underlying spirit, long established in pre-immigrant North America. So often in the contemporary culture of North America, the arts are used as a distraction, something trivial, superfluous or relegated to a means of escaping reality.  In Indigenous North America the arts, especially music, is the primary means of connecting to that which is universal, eternal, holy and good… the means of connecting to that which is real and escaping the shadow world of imagination which is destined to fade and disappear. I aspire to present the authentic North American artistic traditions used to connect humankind to the natural world, to meld the physical and secular to the sacred and eternal, to bridge the perceived gap that separates the generations, to bring all people into hoop of life. Every people and culture has folk arts; expressions that have been passed down intergenerational and over time have come portray universal human values of beauty, balance, symmetry, unity.  During my 40 year touring career to nearly 100 countries I have found that folk arts have universal validity and appreciation that transcend the vortex of pop culture.  It is as if our ancestors are calling out to us and enabling us to offer these gifts as contributions to an emerging global civilization.

My aim as an artist who reaches a primarily younger (school age) audience is to encourage and inspire this younger generation to a global vision in which they see themselves as integral and active participants. 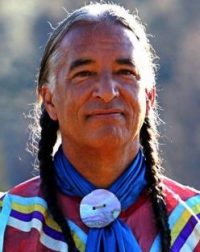 Indigenous Perspectives on the Sacred