Jena Khadem Khodadad, “Zikrullah Khadem: Itinerant Hand of the Cause of God” 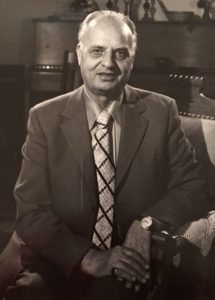 In this talk, “Zikrullah Khadem, The Itinerant Hand of the Cause of God,” Jena Khadem Khodadad relates her remembrances of the life of her father, Zikrullah Khadem, appointed by Shoghi Effendi in 1952 as Hand of the Cause of God. Zikrullah Khadem was born in 1904 in Tehran, Iran, in the Bahá’í enclave known as Hayat-i-Bágh. He was born to a family impassioned with the love of the Faith of Bahá’u’lláh and was nurtured by an illustrious father, Mirza Nasr’ulláh, a devoted mother, Rázziyih Khanum and a courageous grandmother, Bibi Ján. Mirza Nasr’ulláh served as a personal attendant and companion to ‘Abdu’l-Bahá for four years including the period of the Master’s sojourn in the Cave of Elijah and was recipient of tablets from Him. Bibi Ján was a lioness; together, with one other Bahá’í lady, their mission was, time and again, to retrieve the remains of the martyrs for proper burial, by throwing themselves on those blessed bodies, lamenting: “This is my brother, my true brother.” Zikrullah was raised in such a legendary home–a refuge for a constant flow of persecuted and travelling Bahá’ís, a home which received the likes of poets Nayyir, Siná, and Na’im, a home wherein newly arrived messages and tablets from ‘Abdu’l-Bahá were perused and studied in secrecy by the light of a single candle. This talk will recount that at the age of 21, Zikrullah sent a message pledging his love and devotion to the newly appointed Guardian of the Bahá’í Faith, Shoghi Effendi, and attained his presence in 1925, an experience that ignited in him a fire which could not be quenched– with an ever increasing ardor until the end of his life and now beyond.

After his appointment as Hand of the Cause, Zikrullah Khadem’s extensive services in Iran became international in scope. Shoghi Effendi conferred upon him the title, “Itinerant Hand of the Cause of God”; under the direction of Shoghi Effendi, Mr. Khadem travelled extensively in Iran, Europe, Africa, North, Central and South Americas, Asia, and the Caribbean. The name, Zikrullah, which means ‘remembrance of God’ characterized him. Until his last breath, this daughter was a witness to the copious flow from his lips of holy verses which throughout his life he had committed to memory.

Watch Increase My Astonishment in Thee! (an interview with Jena Khadem Khodadad, exploring Mr Khadem’s passion for the Cause of God.) Click to read/download a transcript of the interview.

Tears of Joy: Comments about the Web Talk

Jena Khadem Khodadad, holds a Ph.D from Northwestern University in biological sciences (cell and molecular biology). Her academic career as professor on the medical and graduate college faculties has entailed teaching of cell and molecular biology and neuroscience and research on the molecular organization of biological membranes. The results of her work were presented before national and international scientific forums and published in scientific journals and books. Jena has served on institutions and agencies of the Bahá’í Faith. As an advocate of human rights, Jena has presented before human rights organizations including Amnesty International and the American Jewish Committee on the denial of higher education to Bahá’ís in Iran. As an active member of an interfaith organization, she is dedicated to interfaith understanding and dialogue.

Jena is the daughter of Hand of the Cause of God, Zikrullah Khadem and Javidukht Khadem and was raised in a household infused with love and passion of the Bahá’í Faith. She has attained the presence of Shoghi Effendi and presented at numerous conferences, seminars and classes on “Shoghi Effendi, the Guardian of the Bahá’í Faith”– a theme which is integral to the focus of this web talk.  Jena’s most recent writing, The Dynamics of Growth: Scientific Principles at Work in the Worldwide Advancement of the Bahá’í Faith, is published by George Ronald. This book applies insights from science to the question of growth of the Bahá’í Faith in particular and to growth of religions in general. Jena and her husband, Manuchehr, live in the United States in the Chicago area.

Listen to Jena’s interview on SoundCloud. In Parts 3 and 4 of this interview, Jena talks about the inspiration for her book The Dynamics of Growth and introduces a few of the scientific truths which can illuminate our understanding of the stages of growth of the Bahá’í Faith.