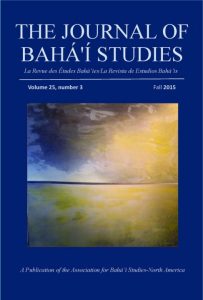 The editor of the Journal of Bahá’í Studies, on the occasion of the publication of the Fall 2015 issue, shares his thoughts on the quest for the virtuous society, the theme that draws together four articles, two poems, and two book reviews.—THE EDITORS

From the Editor’s Desk: The Quest for the Virtuous Society

Underlying the guidance of Moses in creating a tribal community, Muḥammad’s creation of a constitutional nation state with the Ummah of Medina, and Bahá’u’lláh’s blueprint for a global commonwealth is the realization that the creation of a good person is necessarily a social endeavor. Stated axiomatically, human virtue is mostly theoretical until it becomes developed, practiced, and refined in the context of our interaction with others—being good is necessarily a social process.

We can desire to be just or kind or loving or humble. We may even feel in our heart of hearts that we possess all these virtues. But the acquisition and practice of virtue derives from whether or not we are equitable, fair-minded, selfless, kind in our daily lives: in our business practices, in our relationships with friends, family, and those we’ve only just met.

Take the virtue of truthfulness. According to Bahá’u’lláh, truthfulness is “‘the foundation of all human virtues.’” He asserts, “‘Without truthfulness progress and success, in all the worlds of God, are impossible for any soul. When this holy attribute is established in man, all the divine qualities will also be acquired’” (quoted in Shoghi Effendi, The Advent of Divine Justice 26). And yet how can we be truthful alone? But does not truthfulness in its most ample meaning require veracity in terms of our interaction with other human beings? Is this foundational virtue not acquired and continually refined by social interaction and daily practice?

Or take the virtue of fidelity—is not faithfulness, like truthfulness, an implicit covenant between two consenting parties? Of course, we must be true to ourselves, faithful to the path of life we have chosen. Virtue can certainly become formed and reformed when we are alone with our own thoughts as we bring ourselves into account each day. But even in that reflection and meditative state, we are weighing how we practiced the virtues to which we aspire against how we intend to strive for ever more lofty and expansive expressions of those abstract notions of the “the good person”—how we will flesh out that vision progressively in our own lives.

Community building has become one of the central global enterprises of the Bahá’í community because it is clear from the authoritative texts of the Bahá’í Faith that virtue or the virtuous community cannot be legislated or mandated, as history clearly demonstrates. An ethical and caring community emerges from the foundation of the lives of virtuous individuals determined to establish an environment that empowers us all to help each other. Or as Shoghi Effendi, stated in a passage so familiar to most Bahá’ís, society can become uplifted only as a sufficient number of individuals within it strive to express in social interaction the virtues they have internalized:

Not by the force of numbers, not by the mere exposition of a set of new and noble principles, not by an organized campaign of teaching—no matter how worldwide and elaborate in its character—not even by the staunchness of our faith or the exaltation of our enthusiasm, can we ultimately hope to vindicate in the eyes of a critical and sceptical age the supreme claim of the Abhá Revelation. One thing and only one thing will unfailingly and alone secure the undoubted triumph of this sacred Cause, namely, the extent to which our own inner life and private character mirror forth in their manifold aspects the splendor of those eternal principles proclaimed by Bahá’u’lláh. (Bahá’í Administration 66)

There is, then, a reciprocity, a symbiotic relationship between the “good person” and “the good society.” Society as a whole cannot advance unless empowered and uplifted by ethical individuals working collaboratively, but an ethical individual cannot become good in a vacuum inasmuch as virtues must needs be developed and refined in association with others.

In this issue we have a selection of articles that deal with those discourses in society concerned with ethics and with virtues, whether understood and exercised individually or collectively, whether expressed specifically in the environment of the world of business or more generally in the all-important discourses of society as a whole, whether recollected in the history of virtuous souls—in the lives of both heroic and the ordinary.

The first article by Helen Cheng and Catherine Nash, “Emblems of Faithfulness: Pluralism in Meaning and Beauty in the Ordinary,” establishes the theme for the issue by discussing how ‘Abdu’l-Bahá in Memorials of the Faithful celebrates fidelity in lives that are extraordinary and those that are simple. The implicit meaning here is obvious but important—that faithfulness can be found in the simplest acts of the sincere, that the ordinary life lived well may be as worthy of celebration and as inspirational as the lives of those called upon to undertake great challenges in the theater of momentous and dramatic events.

The two pieces that follow take up this theme as applied generally to the discourses of society. Haleh Arbab’s discussion—from a talk given at the 2014 ABS conference—portrays the objectives of the Institute for Studies in Global Prosperity (ISGP) in “Learning to Read Social Reality in the Light of the Revelation.” Here, too, social change is discussed as emerging from participation of Bahá’ís in the discourses of society, whether at the individual level of the community, or at the collective level of concern for the challenging issues confronting the global stability and prosperity.

François Couillard’s article “The History of ebbf: Twenty-Five Years of Contributing to the Discourse of Ethics in Business” examines the application of these same concepts of virtuous behavior in one specific arena at the heart of society, ethical business practices. More specifically, Couillard examines the results of the twenty-five years during which ebbf (Ethical Business Building the Future, formerly European Bahá’í Business Forum) has promoted discourse about the very practical benefits and outcomes of applying ethical strategies to both the organization and the everyday relationships in the world of business practices.

In his poignant examination of the ethical dilemma of discussing death with terminal patients, oncologist Aaron Alizadeh’s article “Primum Non Nocere: Reflections of a Bahá’í Oncologist about Treating the Dying Patient” allows us a glimpse into the internal struggle of a Bahá’í doctor who must learn “to read” the patients to know when or if to bring up the subject of death. More particularly, Alizadeh focuses on whether or not, as a Bahá’í believing in the continuity of the soul, he has the obligation, or even the ethical right, to offer the comfort that the Bahá’í perspective provides to those who are dying progressively day by day.

Finally, we have an insightful examination by Roshan Danesh regarding the thematic structure of the Kitáb-i-Aqdas, the primary source of Bahá’í laws and ordinances, as well as the essential repository of the blueprint for constructing a global commonwealth established according to spiritual principles. Titled “Some Reflections on the Structure of the Kitáb-i-Aqdas,” Danesh’s article provides an original and creative proposal about how the organization of this ostensibly unstructured work is actually set forth by Bahá’u’lláh in the first five paragraphs.

We also include two poems and the last two book reviews that will appear in print in the journal—as we noted in the spring issue, henceforward all book reviews will appear on a new portion of our web site so that we can have room for many more reviews and have them appear in a more timely fashion. The two poems are “Moving Forms of Dust” by Donna Denize and “On Meeting Robert Hayden in a Dream” by Abdul Ali, and the two book reviews are Anne Pearson’s review of Awakening: A History of the Bábí and Bahá’í Faiths in Nayrίz by Hussein Ahdieh and Hillary Chapman, and Shahbaz Fatheazam’s review of The Quickening: Unknown Poetry of Táhirih by John S. Hatcher and Amrollah Hemmat.

Tagged with: Association for Baha'i Studies