↓ Skip to Main Content
Home › News › Letter to the Editor: Comments on “Interreligious Dialogue: Myths and Reality,” an Interview with Professor Leonard Swidler

Letter to the Editor: Comments on “Interreligious Dialogue: Myths and Reality,” an Interview with Professor Leonard Swidler 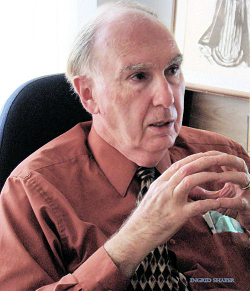 Some listeners loved the interview; some did not. Some wished to hear about additional facets of the topic. For others, it was a first experience with the Wilmette Institute’s Web Talks, an experience that resulted in telling others about the talks and commitments to listening to future Web Talks. The talk is now available on the Wilmette Institute’s YouTube channel. Listen for yourself, and make up your own mind. Here is a selection of comments—THE EDITORS

Thank you for having that webinar with Professor Swidler on interfaith dialogue. I have long appreciated the Professor’s work as well as that of Professor Hans Kung, who was discussed. I’m a Bahá’í as well as retired military officer and am currently an intelligence analyst who delves in the arena of complex grand strategic thought in international affairs, the study of war, and the nexus of religion with those areas of thought and endeavor (just war theory, counterinsurgency theory, future of war, and collective security theory are all areas I focus on).  I have long thought that a strategic (as well as a moral) imperative for global stage interfaith dialogue exists and have felt Professor Swidler’s work and thought have helped in the advance of that imperative towards reality. The webinar today with Professor Swidler was thought provoking and important. Thank you for hosting it. This was the first Wilmette Institute event I’ve attended.  More events with scholars dealing with those kinds of issues will keep me interested in attending more.—VINCENT LITTRELL

This was a very informative Web Talk. I do appreciate having the occasional non-Bahá’í speak. It seemed to go on a bit long.—LAURA FAIRCHILD

[This Web Talk] provided an interesting window on elements of the history of this movement and this remarkable man, and his remarkable contribution. Thank you.
____It is interesting to me to note how determinedly disinterested some of my religious-studies friends and professors are regarding the history and scripture of the Faith. Your recent webinar “Seven Ways of Looking at Religion,” however, was really helpful in envisaging useful ways to approach sincere discourse with some aspects of the current religious studies field.—VIVIAN O’NEILL

The dialogue was great!!! Especially the second hour. Talked about it at devotions the next day and told people to look it up and also to get in on the next ones. Of course, it opened all kinds of issues, questions, and more to look at. . . . I would love to be more involved with Wilmette Institute and plan to listen to more.—JOHN MCGIMSEY

Thank you for arranging for the webinar on interreligious dialogue. The interviewer and the speaker provided interesting perspectives and a clear historical dialogue from a Christian perspective. I would have appreciated more about the current challenges with less historic perspective.—ANNE GROVE