Dr. Robin Chandler is a speaker you will want to know, and her recent Web Talk “Bahá’í Identity: Conscientious Spirituality and the Games People Play” is one you will want to listen to—maybe several times. In describing her talk, she asked a number of questions that are at the heart of the troubled times in which we live.

In troubling times such as these, being a Bahá’í is a spiritual privilege. Our concerns about the collapse of societies worldwide should not distract us from the exhilarating work of building a divine civilization. What makes Bahá’í identity special in the Cycle of Fulfillment and what is our unique role? How do we reconcile our civic citizenship with our spiritual citizenship? Is our spiritual life grounded in the guidance of Bahá’u’lláh, the social-action principles of ‘Abdu’l-Bahá, and the strategic analyses of the Guardian? Why is America’s destiny so critical to the achievement of social justice and peace when differences of race and culture, gender, and age seem to be overwhelming roadblocks to unity? My Web Talk will demonstrate how conscientious spirituality can overcome the “games people play” about difference, “otherness,” and why we all need to “woman-up” to build a civilization the likes of which humanity has never seen.

You may want to print out a copy of Robin’s PowerPoint so that you can make notes as she talks or, at least, upsize the image on your computer screen. She sets out to “explain and define aspects of Bahá’í individual and community life so that we can grasp some of the hot-button issues in our global civilization” and be, truly, “builders of a new civilization,” the “heavenly army for a strategic campaign that establishes social justice.” If we achieve that, Robin says, “there is nothing stopping us.” Here are comments from several who listened to the Web Talk live.

Robin has a lot to offer! Please send her my thanks and my suggestion to hold a Wilmette Institute class on intergenerational connections in the Bahá’í community. This is a challenge my cluster faces. I have a number of folks that would be an instant audience for this topic. If Robin would care to investigate this further, I would be honored to provide specifics.—SANDRA SEIBERT

Just the BEST. Made my day with spiritual depth and directness.
But could not see the quotes.—BLANCHE GRANT

I really enjoyed the Web Talk with Robin Chandler. I had to leave before all the questions were answered. I did leave a comment and sort of a question that I think I know the answer to. I just wanted to get some feedback from her. I was getting ready to go to a fireside in our community. The comment I left . . . is as follows: “How should we react when we receive emails and other paraphernalia about all the different causes that we as Bahá’ís support like: . . . . The cause of the Spanish people who have had their families split up because they crossed the border into the U.S. illegally or sometime legally, but don’t have an income. There are other causes as well which don’t come to mind right now. I feel overwhelmed at times because I can’t be spending my time supporting these causes when there is so much Bahá’í work to do. I put Bahá’í first. I am glad that I listened in to the Web Talk, and I would like to be informed of others coming up. The second Sunday of each month is when we have our fireside, so it would be better if we could do it on any other Sunday except Feast day, of course, or Holy Days.—ETHEL VAN ZANTEN

This is truly wonderful and explicit for people anxious to learn about the Faith, to learn how it evolves and why—and why so many people across this globe are hungry for such writings. May I congratulate the Institute in its very intelligent outreach to the public in general and to Bahá’ís in particular to give them the opportunity and allow them to fully understand the whys, the wherefors, and the whats that embody this wonderful belief, which is spreading its wings across the planet. Often I wonder why not more people have undertaken to learn about this, but then I think back in history and learn that all faiths took time to be understood fully before being accepted. . . . Thank you for being so up-beat and generous.—DORITA deLEMOS DOWN 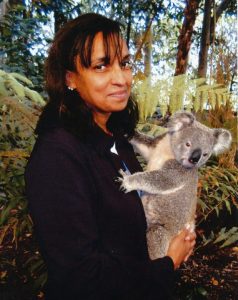 Here is information about Dr. Robin Chandler. She conducts field research as a gender specialist in international development, most recently in Uganda and Liberia under the auspices of the CIES Fulbright Program and her home institution, Northeastern University. As a sociologist her co-edited book Women, War, and Violence: Personal Perspectives and Global Activism (2010) documents the impact of war on women globally. In 2013 Chandler was a visiting scholar at Makerere University’s School of Women and Gender Studies (Uganda) and served as advisor to the Liberian Delegation at the 57th United Nations Commission on the Status of Women. As an interdisciplinary scholar-advocate she has collaborated with government ministries, community agencies, cultural institutions, and higher education on issues of human rights, racism, discrimination, the arts, and science and technology. Chandler is a former Fulbright Scholar (South Africa), Fulbright Specialist (Liberia), and National Science Foundation grant recipient and works professionally on six continents. Her projects as founder include DRUM magazine (1969), Caravan for International Culture (1980–1990), and the Peace Doors Project (1993–). As a practicing artist, she is affiliated with the U.S. State Department’s Art in Embassies Program and holds an extensive publication and exhibition record since 1978. An early memoir “The Beautiful Flight Toward the Light: Reflections of An Artist’s Life” (Australian Journal of Bahá’í Studies, 2000) documents her career as a professional artist integrating spiritual principles into her work. She has been a member of the Bahá’í Faith for forty-eight years and sits on many Boards.