The Wilmette Institute was shocked and extremely saddened to learn of the untimely death of Dr. Lisa Ortuno, age 46, in a tragic automobile accident in Wake Forest, North Carolina, USA, on December 16, 2015. 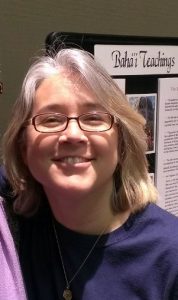 Lisa has been a faculty member in the Wilmette Institute’s Science and Religion courses for two years. Born in 1969, she obtained her Ph.D. in genetics and was an active researcher in the field. Because of her great interest in science and religion, she was invited to be a fellow for Sinai and Synapses, “a small interfaith group of clergy, scientists and writers who are committed to elevating the discourse surrounding religion and science.” A moving obituary of her appears on their website: http://sinaiandsynapses.org/multimedia-archive/remembering-a-great-advocate-for-science-and-religion/ (in the photograph Lisa is in the front row wearing a purple blouse). An interview of her appeared on the Huffington Post Religion website here that described her fascination with the relationship between science and religion. She was also involved in the Science and Religion Special Interest Group of the Association for Bahá’í Studies. Dr. Louis Venters posted a moving reminiscence about her here.

In addition to two grown sons, Benjamin and Joseph, and two step-sons, Lisa leaves an eight-year old daughter Zoe. At the funeral on December 21, many moving tribunes were offered. Her ex-husband, John, offered a story that for many captured Lisa perfectly. She had talked him into joining her in some godforsaken swamp near a nuclear power plant, where she was collecting alligator eggs (she studied the migration of alligators through their DNA). They were in a rowboat when she spotted a mountain of eggs for gathering (they would all be returned later). Handing a wooden oar to John, she began collecting. “What’s this for?” John asked. “If the mother comes after us, just bop her on the nose,” she said, as if it were the simplest thing in the world.

The faculty and learners in the Science and Religion course offered reminiscences as well. Roger Neyman, a fellow faculty member, offered this:

Of all things, she was a devoted and conscientious and loving mother. At this point I ask that all of you send your thoughts and prayers for healing and solace for her beautiful daughter, Zoe.

Lisa was a very good and strong collaborator, as shown by connections she formed and service she engaged in throughout the world. She was an intellectual light, helping the world to engage the challenge of harmonizing science and religion. Her service in this arena has been thorough and longstanding.

More than that, she cared deeply about the questions facing the world and the Bahá’í Faith. She was not fearless, but was decidedly brave and thoughtful about choosing when and how to ask sensitive questions, and always worked for the betterment of everyone concerned and for the Cause of God.

Christine Muller, who met Lisa at the Parliament of the World’s Religions in Salt Lake City in October 2015 and who helped serve as faculty in the Science and Religion course after her passing, added this:

I was very impressed with the way Lisa encouraged discussions among the participants in the Wilmette Institute course on Science and Religion. She did this with much intelligence, creativity, and humility. I was planning to learn from her and share her approach with my fellow faculty in the Climate Change and Sustainable Development courses. She was definitely a very gifted teacher and is being missed now by many, many people.

Candace Moore Hill, the Wilmette Institute’s course designer, worked closely with Lisa online to develop the Science and Religion course and also met her for the first time at the Parliament in October. She remembers Lisa this way:

In today’s interconnected social media world, we sometimes meet new friends for the first time online. That’s where I first met Lisa Ortuno, as a faculty member for the Wilmette Institute Science and Religion course, in an email conversation. Lisa greatly enjoyed social media and the opportunity it gave her to consult and connect with people all over the world about issues dear to her heart. Her work required that she travel throughout the U.S., and she always took the opportunity to make new friends. She was a delightful companion, be it for a meal, shopping, sitting in a conference session, or singing in a choir. Scrolling through her Facebook page to read expressions of shock and dismay, her friends remember that she was a shining light of courtesy, friendship, and humility. Lisa was a good neighbor in her local community and online. She held strong beliefs about the equality of human beings of every description, in every respect. Her inner light was so attractive that you wanted nothing more than to walk with her into the future. The world is a better place because she was here with us.

Farnaz Perry, another person who met Lisa at the October Parliament, offered this memory of her:

I met Lisa Ortuno when we were both looking for a roommate at the Parliament of Religions. I was so utterly delighted when I saw her in person that first night of the conference. We immediately started to talk about religion and evolution and her work with the new translation of Some Answered Questions. Every night I looked forward to our deep and interesting discussions about the Faith and current issues. I learned so much from her in such a short time. She liked to question everything and was happy that I didn’t shy from that either. We shared intimate information about our relationships with the Faith and a bit about our families. She was better than me in watching the time so that we got enough sleep. Inside I wished we could stay up longer since every moment with her was gold. In the mornings, on our way to the conference, we joked and laughed. I was so happy I had found her. She called me “roomie,” and we had promised to go to conferences together. When we parted she said she wants us to be roommates forever. So please if you get there before me and want to attend a conference in the Abhá Kingdom remember who Lisa’s roommate is and don’t cut in line.