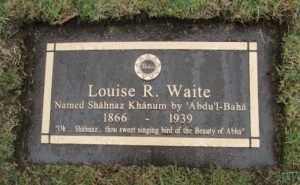 The Spiritual Assembly of the Bahá’ís of Glendale, California, and the Los Angeles Bahá’í Archives reported in January that, “with the generous contributions” of many Spiritual Assemblies and several individuals, they had collected enough funds to commission a marker for Louise R. Waite and place it on her grave, which is next to that of her husband Edward F. Waite, seventy-seven years after her passing in 1939.

A memorial program and gathering were being planned to commemorate Louise, named Shahnáz Khánum by ‘Abdu’l-Bahá, at her gravesite. But, the Glendale Spiritual Assembly said that the grave is located “on a very steep hillside slope where there is not the possibility to place chairs, or even stand without the risk of falling.” Hence the memorial gathering was canceled, and Bahá’ís are invited to visit her grave to pay their respects. The grave is located in Forest Lawn Memorial Park, 1712 South Glendale Avenue, Glendale, California, on Sunrise Slope #4426, Space 2. 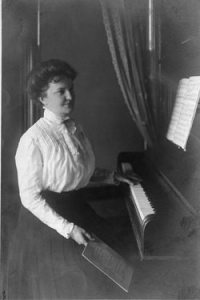 Louise R. Waite became a Bahá’í in Chicago not long after Thornton Chase became one in 1894. She corresponded with ‘Abdu’l-Bahá (receiving forty-one Tablets from Him) and with Shoghi Effendi, who wrote on her passing: “Passing of Shahnáz, beloved pioneer, deeply lamented. Record outstanding services imperishable. Reward assured. Ardent prayers.”

Many thanks goes to Candace Moore Hill, who, through her searches on Find a Grave, discovered the absence of a marker on Waite’s grave, and to Paulette Pappas, who found much information in the Los Angeles Bahá’í Archives and who designed the marker for Waite’s grave.

For additional information on Louise R. Waite, see “Louise R. (Shahnáz) Waite (d. 1939): Her Grave to Finally Receive a Headstone,” published in the January issue of the eNewsletter.