Iraj Saniee, Marjan Nirou Saniee’s husband, is grateful to Sandra Hutchison and Peggy Caton for adding new material to his first draft and to Robert Stockman, with whom Marjan enjoyed working enormously and unconditionally.

Esteemed faculty member Marjan Nirou Saniee, 54, passed away on June 1, 2017, at her home in New Jersey, where she had lived for thirty years. Marjan cofounded with Sandra Hutchison the first Wilmette Institute arts workshop course Practicing the Arts and for the past five years served as a faculty member for this course and for The Bahá’í Faith and the Arts, courses in which she often took the initiative in discussing ways to enrich them and to deepen the online discussions. 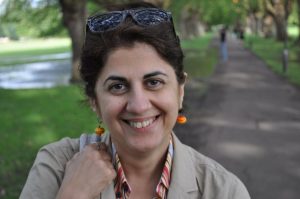 A beloved teacher among the Wilmette Institute faculty, Marjan’s deep interest in her students and her commitment to offering detailed and honest feedback that both challenged and uplifted them made her ideally suited to the work of mentoring visual artists in the hands-on workshop course. She delighted in giving developing artists the opportunity to present new work and did all she could to foster among these often isolated artists a sense of community. By sharing the insights she had gained from her own long practice as a visual artist, she was able to inspire new work as well as transform her students’ understanding of their artistic practice. Her views on the nature of art, on art making and the creative process, and on the kind of aesthetic that might inform the work of visual artists inspired by the Bahá’í vision and teachings stimulated lively discussions that were engaging and ongoing.

A gift to her colleagues as well as her students, Marjan’s contributions were of inestimable value to the Wilmette Institute courses she co-taught. The impact of her keen and questioning mind, her generous spirit, and her fresh and ever-evolving vision of what art might be and how the visual artist might contribute to social transformation will long be felt by her students and fellow teachers.

Background. Marjan was born on September 30, 1962, in Tehran, Iran, and grew up in Tehran and later in Westlake Village, California, where her family moved before the 1979 Iranian Revolution. Marjan’s paternal grandfather, Nader Nirou, a successful tea merchant and a prominent member of the Bahá’í community in Ashqabat in Soviet Central Asia, had perished in the Siberian Labor camps in the 1930s during the Stalin years. Marjan’s father Ataollah, her grandmother, and her three aunts subsequently emigrated from Ashqabat to Mashhad, Iran, where the family had settled in the 1940s. Marjan’s mother Hourie Moftakhar comes from a family of merchants of Jewish extraction in the ancient city of Hamadan.

Southern California. In 1980, after graduating from Westlake Village High School, Marjan entered California State University, Northridge, to study painting and piano performance in a double major program. Cal. State Northridge, as she always called it, is not only where Marjan focused primarily on painting and piano, it is also where she developed her sense of social conscience. She worked on multiple after-hour programs during her Cal. State Northridge years, ranging from Community Food Bank to Divestiture from South Africa. It was during the same period that she also got involved with the Los Angles Bahá’í Study Group, where she met Anthony Lee, Peggy Caton, Mehrdad Amanat, Richard Hollinger, Juan Cole, Steven Scholl, and many others who influenced her outlook on serious scholarship. Toward the end of her undergraduate studies in 1984, Marjan met her future husband, Iraj Saniee, in Los Angeles. Following his completion of his doctorate and his relocation to New Jersey, Marjan married Iraj on May 23, 1987, and moved to New Jersey on June 1, 1987. 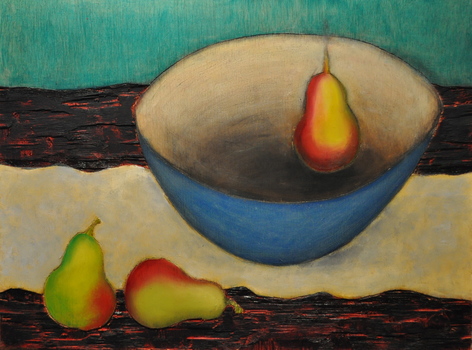 MFA at Pratt Institute. After she arrived in New Jersey, Marjan enrolled in an MFA program in painting at the Pratt Institute, Brooklyn, New York City. Despite a long commute, Marjan’s two years at Pratt were among her happiest. The commute, consisting of a one-hour bus ride plus two twenty-minute metro train rides, each way, provided Marjan a wonderful opportunity to meet new and different people outside the Iranian or Los Angeles Bahá’í milieu and opened her horizon to the bigger world in which she had chosen to live. Concurrently, Marjan started experimenting with painting on carved plywood, a totally new and novel medium, particularly suited to the expression of her abstract forms and impressionistic fruits. Marjan worked intensely on her newly invented medium, which formed the basis of her Master’s thesis at Pratt and subsequently a lifelong obsession and joy. In her own words, Marjan described the medium this way: “This original style exhibits the textural possibilities of wood resulting in a unique coming together of vivid colors, complex textures and simple abstracted shapes.” For more about her artistic theory, click here.

Back to New Jersey. After she completed her Master of Fine Art’s degree, Pratt Institute offered Marjan a full-time administrative job, which was the typical way of keeping talent in-house until a possible faculty position opens. Marjan turned down the offer, as the commute would be impossible once she had children. This was Marjan’s second act of sacrifice for the family she was yet to have, her first one being her move to New Jersey from California, where she had built strong friendships and where much of her family, especially her parents, lived. She never regretted either decision. If anything, she always found the process of making new friends natural and enjoyable. Marjan held a few exhibitions of her artwork during this time.

Kent Place School. At the completion of her MFA degree, Marjan secured a teaching position at Kent Place School, a private all-girls school in Summit, New Jersey. This school was literally across the street from the apartment where she and her husband lived in Summit. She found out about the vacancy at Kent while she and her husband were taking a walk and read an ad on the school bulletin board. Marjan enjoyed her teaching job tremendously and, in fact, “Ms Nirou” was an instant celebrity at Kent Place School, much to the chagrin of the school’s old guard administrators who seemed to have returned to Kent Place School from the ghosts of Victorian England a century earlier. Marjan’s stay at Kent Place School lasted under three years, her departure coinciding with the birth of her first son, Kamron. Two years later she welcomed another son, Bijan. Marjan was a dedicated mother and thoroughly enjoyed spending every minute of her time with her two sons. Despite her love for the arts, she did not touch a canvas or her preferred medium of plywood until her two sons had finished elementary school.

Return to Painting. Marjan’s return to painting in the mid-2000s was the start of a period of wonderful productivity and freedom ultimately resulting in over forty oil-on-plywood pieces and exhibitions of her work at multiple places, including group exhibits at the Painting Center (Working It Out) in New York City, and Tara Gallery in Los Angeles. Paradoxically, this was also a period of intense medical treatment for her due to recurrences of cancer, which had been diagnosed in the spring of 2000. Marjan never returned to full-time employment after the Kent Place School but enjoyed short-term teaching jobs at community and borough classes, which were easily accessible to her. Several exhibitions of her work during this time got public attention. Marjan also curated art at the Artspace@MONDO in Summit, New Jersey, for several years where she exhibited the work of local artists, following one of her own work. 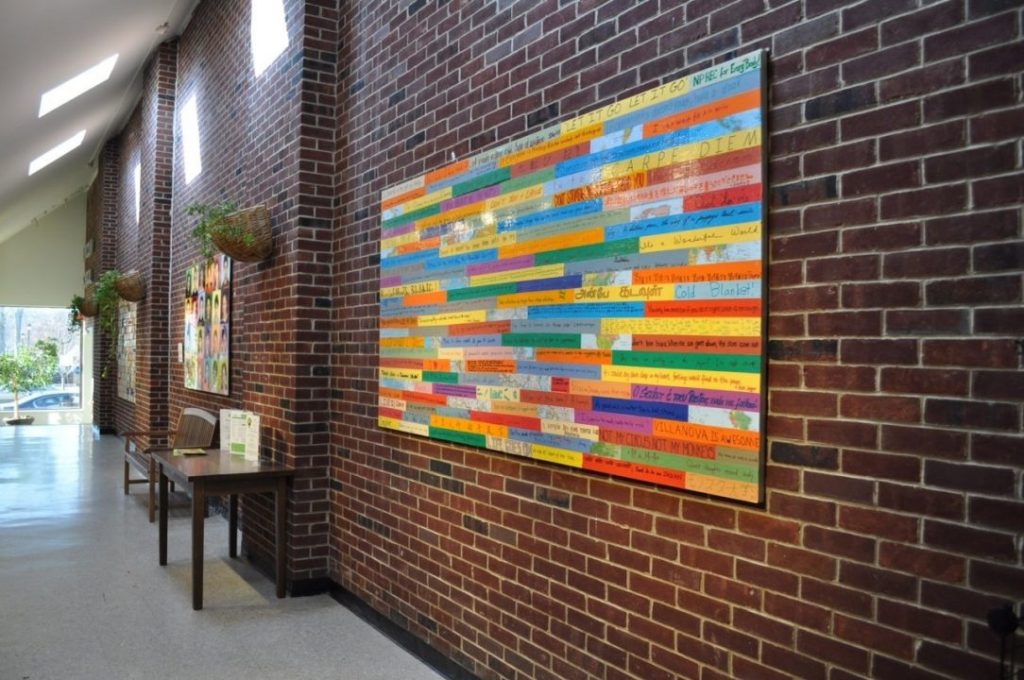 ‘Words’ – one of a series of public art projects initiated by Marjan Saniee for New Providence Recreation.

Public Arts. During the last six years of her life, Marjan refocused her attention on the broader community aspects of her art. She conceived and implemented three large-scale pieces of community art on display at the Municipal building in New Providence, New Jersey. These she funded from several grants that she received from Union County and the State of New Jersey. She also founded the New Providence Public Arts (NPPA), a nonprofit and independent forum with the mission of raising public interest in the arts in her town. As NPPA chair, she solicited and curated six installations of public art throughout her town that are as much testimony to her civic awareness and artistic sensibilities as they are to her commitment to inclusivity.

Bahá’í Faith. Marjan’s dedication to the principles of the Bahá’í Faith, in which she was raised, was unbending. Both in her formative years in California and subsequently in New Jersey, she did her utmost to contribute to the Bahá’í community, especially to the youth and the larger interfaith outreach. She served on interfaith groups in her town for many years and participated and occasionally spoke at events held at the New Providence (New Jersey) Lutheran Church, New Providence Episcopal Church, Our Lady of Peace Catholic Church, and the Jewish Community Center in Summit, among many others further way from her home.

The Friend.  Besides her art and family, there is one other prominent aspect of Marjan’s life that needs to be mentioned. This is her gift of being genuinely interested in, and caring for, people. Young or elderly, educated or simple, professional or laymen, and members of many religions were among her large cadre of close friends. Most people responded to her positive energy and vibrant spirit and were deeply touched by her natural kindness. She left a legacy and a big vacuum for the rest of us to fill.

Besides her husband Iraj and two sons, Kamron of Brooklyn, New York City, and Bijan of Santa Barbara, California, Marjan is survived by her mother Hourie Nirou and her sister Mojgan Manshadi, both of Irvine, California; her brother-in-law Farzin Manshadi; and her niece and nephew, Nieku Manshadi of Austin, Texas, and Leila Manshadi of San Francisco, California.