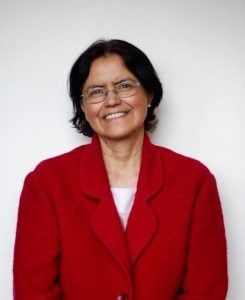 Dr. Littlebrave Beaston has published a 575-page compilation of quotations, stories, and summaries of articles about American Indians in literature published by Bahá’ís. Many years in the making, Dr. Beaston combed through Bahá’í sacred texts, letters by and behalf of Shoghi Effendi and the Universal House of Justice, talks by Hands of the Cause, pamphlets, audio recordings, videos, and articles in The Bahá’í World volumes, Bahá’í News, World Order, and many other publications to assemble her collection, which is updated through 2017. In April 2015 she called the Director of the Wilmette Institute—with whom she had taken courses—to discuss the compilation, which had already gone through literature review. The Institute posted it on its public website in the summer of 2016 and asked people to assist with the editing, because the Wilmette Institute didn’t have the resources to edit such a massive work. A student of many Wilmette Institute courses, David Bowie of Halfmoon Bay, British Columbia, Canada, took on the task of proofreading the entire text and spot checking some references. Dr. Beaston reviewed all the changes, and the Wilmette Institute posted revised files to its website. Finally, in late 2017, Dr. Beaston self-published the book. Amazon carried the book and, more recently, the Bahá’í Bookstore. It is available for $29.75.

Dr. Beaston is a naturopathic healer and acupuncturist of Tsimshean, Makah, and Greek ancestry who has lived on reservations, in rural areas, and in big cities. She hopes that her research “will inspire others to select a strand and write more” and will stimulate further research about indigenous involvement in the Bahá’í Faith.