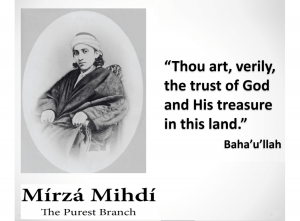 This presentation familiarizes participants with the short life of Mírzá Mihdí whose sacrifice was raised by Bahá’u’lláh to the same station as the great sacrifices of humanity’s religious history. He was the youngest son of Bahá’u’lláh and Asíyih Khánum. Born in Tehran in 1848, Mírzá Mihdí was separated from his parents when they were exiled to Baghdad in 1852. He joined his parents in Baghdad in 1860 and then suffered three successive exiles with his Father over the next ten years to finally be imprisoned in the city-prison of ‘Akká in 1868.

When Mírzá Mihdí fell from a skylight in the roof of the prison where he, his family and many Bahá’ís were imprisoned with the Manifestation of God, he was severely injured and likely to die from his injuries. When offered his life by his father, he chose instead to sacrifice it so that the doors of the prison might open and those who longed to see Bahá’u’lláh attain their desire.

Dr Boris Handal is a Professor of Education at the University of Notre Dame Australia. His publications comprises over 100 conference and journal papers, books and book chapters published in Australia, the United States of America, Europe, Latin America, Africa and Southeast Asia. Dr Handal has also published several books in the field of 19th Century Persian history and culture.