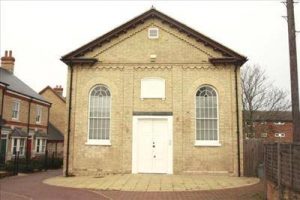 The official opening of the Afnan Library will be made by The High Sheriff of Bedfordshire, Mr. Colin Osborne, at 10:30 a.m. on February 12. An open day at the Library will follow at 11:30 a.m. Neighbors of the building, Bahá’ís, and everyone who has helped with the Library over the past thirty-five years are invited to the second event. Light refreshments will be served at both events.

The Afnan Library, which was established in a codicil to the will of the late Hand of the Cause of God Mr. Hasan M. Balyuzi, moved into its new quarters (a former Baptist chapel) in late 2013. After more than a year of installing bookshelves and desks/alcoves for researchers and organizing the holdings of the Library, it is now ready to welcome researchers by appointment.