“Parallels in the Lives and Ministries of Tahirih and Paul” 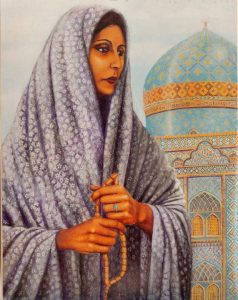 Illustration by Ivan Lloyd from “Tahirih: A Poetic Vision”

Táhirih, a woman born into the Islamic religion in the nineteenth-century Persian Empire, is the most renowned heroine of the earliest days of the Bahá’í Faith. Paul, a man born into the Jewish religion in the first century Roman Empire, is often referred to as the most prominent apostle in the early history of Christianity. Táhirih and Paul are separated by gender, religion, nationality, culture, and eighteen hundred years. And yet, when stories of their lives and apostolic ministries are compared, parallels arise. This talk will point out nine parallels in the ministries of Táhirih and Paul and reflect on the value of this knowledge in interfaith dialogue.

JoAnn Borovicka began a Bahá’í/Bible research project in 1999 with a threefold purpose: (1) to collect questions related to the Bible that were of great interest to Bahá’ís as well as to Christians, Jews, and members of other religions, (2) to find Bahá’í teachings related to those questions, and (3) to make this information easily accessible. Hundreds of workshops, thousands of conversations, and many surprises later, her research was published in 2016 as Light of the Kingdom: Biblical Topics in the Bahá’í Writings, an introductory compilation of Bahá’í teachings on biblical subject matter that combines superb scholarship with remarkable brevity. JoAnn has also had numerous papers on Bahá’í/Bible themes published in the Lights of Irfan series. In her secular work, JoAnn is an educational consultant specializing in dialogue methods of education, a profession that has taken her across the United States as well as abroad working with schools and universities as well as organizations such as Global Learning Partners, the John F. Kennedy Foundation, and Habitat for Humanity. JoAnn received her M.A. degree in Education from the University of South Carolina. She and her husband, Mike, live in Greenville, South Carolina. Website: JoAnnBorovicka.com.