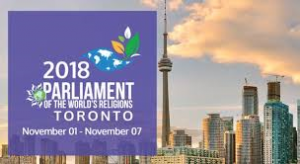 Request from the American National Spiritual Assembly. The National Spiritual Assembly of the Bahá’ís of the United States has recently sent a letter to the American Bahá’í Community, sharing information about the seventh Parliament of the World’s Religions that will take place in Toronto, Canada, from November 1–7, 2018. The theme of the conference is “The Promise of Inclusion, the Power of Love: Pursuing Global Understanding, Reconciliation, and Change.” The purpose of the National Assembly’s letter is to encourage Bahá’ís to submit proposals for presentations at the Parliament, matching or exceeding Bahá’í participation in the 2015 Parliament:

As some may remember, the last Parliament took place in Salt Lake City in 2015, where significant Bahá’í contributions were made to the discourse, both in plenary sessions and in workshops. A number of proposals from individual Bahá’ís, acting as sole presenters or in partnership with Bahá’ís and those from the wider society, were accepted by the Parliament for workshop presentations. We are hoping that these excellent contributions to the 2015 Parliament can be replicated or surpassed this year. If you feel that you would like to contribute to this effort, please note that the deadline for applications is March 1, 2018. All applications can be submitted to the Parliament at https://parliamentofreligions.org/rfp.

The National Spiritual Assembly also asks that individuals submitting proposals to the Parliament “notify our Office of Public Affairs at BahaisUS@usbnc.org.”