Student PowerPoint on the Íqán Posted to Wilmette Institute Website

One of the significant results of the Wilmette Institute’s course on The Kitáb-i-Íqán: An Introduction (faculty, Christopher Buck and Necati Alkan) during the summer of 2017 was the production of a lengthy and sophisticated PowerPoint on the Book of Certitude by Marco Oliveira, a Bahá’í from Lisbon, Portugal. A software tester, Marco notes in his personal profile in the course that “deepening, studying the Writings, and theology have been my passions.” 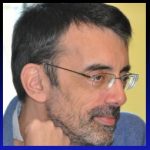 Marco’s 64-slide review of the Kitáb-i-Íqán called The Book of Certitude: The Main Theological Principles begins with a summary of the book’s historical context and the life of its author, Bahá’u’lláh. He notes that Shoghi Effendi has termed Bahá’u’lláh’s work the Faith’s main doctrinal work (as opposed to the Kitáb-i-Aqdas, its main legislative work; the Hidden Words, its main ethical work; and the Seven Valleys, its main mystical work).

Part of the background of the Íqán involves Bahá’u’lláh’s forerunner, the Báb, whose uncle had refused to accept the claims of His nephew. Thus the Báb’s uncle sent a letter to Bahá’u’lláh asking a series of questions. To answer the them, Bahá’u’lláh revealed the Íqán over a forty-eight-hour period in mid-January 1861. The treatise also constitutes the completion of the Báb’s Persian Bayán. 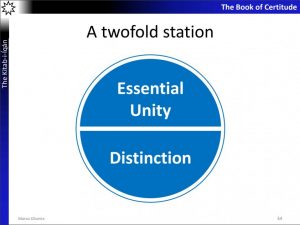 PowerPoint slide showing twofold
station of the Manifestations of God

Marco’s PowerPoint focuses on three crucial aspects of the Kitáb-i-Íqán: its concepts of God, the Manifestation, and human beings. A series of slides quote selected passages from the Íqán and offer commentary on them, often from Shoghi Effendi, who included a profound summary of the Book of Certitude in God Passes By. One slide provides twenty-six titles for God used in the Íqán. The PowerPoint includes many colorful photographs and other illustrative materials. A careful perusal of the slide show provides an excellent outline of many key principles in Bahá’í theology.

The PowerPoint closes with a summary of Bahá’u’lláh’s hints of His station because the Book of Certitude was revealed several years before His declaration in the Garden of Ridván in 1863. A bibliography, acknowledgments, and brief introduction to the author follow.