In July and August, Dr. Todd Lawson gave a series of three superb Web Talks about the Báb’s Qayyumu’l-Asmá, His first major work of revelation, begun the night of His declaration to Mullá Husayn. At the same time Todd began a course on the book, which centered on the three talks but also included many scholarly readings and official as well as provisional translations of the book. Among the many questions he answered was “why did the Báb select the Qur’án’s Sura of Joseph to write His commentary?” Todd noted that Joseph is considered a prophet in the Qur’án, and is the only prophet discussed there whose mission is peaceful and nonviolent. Joseph’s story is one of reconciliation and reunion of family members, love, and mercy, which throws light on why Bahá’u’lláh is called the “true Joseph.” Part of Todd’s answer was this:

The central event in the Qur’án’s Sura of Joseph is in the series of verses around the recognition by his brothers of Joseph, who is now a powerful official in Egypt. This has great literary, dramatic, and spiritual import. The technical word for such recognition, from Aristotle, is “anagnorisis.” It is what happens when Oedipus realizes what’s what, for example. Very powerful. It functions in literatures throughout the world. With this work of the Báb’s we see how its implications go far beyond the merely literary.

The Qayyumu’l-Asmá is a new Qur‘án which is centered on the drama of Joseph. This includes the central recognition scene but also emphasizes the peaceful nature of Joseph’s dispensation. Remember that Joseph was also a model for the contemplation of the ministry of Jesus in the early Church (note the two companions crucified on either side of Jesus, his father’s name is Joseph and so on). The theme of love in Jesus’ teaching may be thought to derive from Joseph’s story. In a sense, the Báb is saying that the true message of the Qur’án is precisely the story of Joseph and all that it implies. He has rearranged the original Qur’án to accomplish this change in perspective. Quite an achievement.

Partly in response to the many questions and comments pouring in, Todd has provided a list of online articles and websites for those who want to continue their study of the Qayyumu’l-Asmá on their own. These resources are listed at the bottom of the Todd Lawson Web Talk Series page. The comments below are representative of the many emails received by the Institute after his web talks. 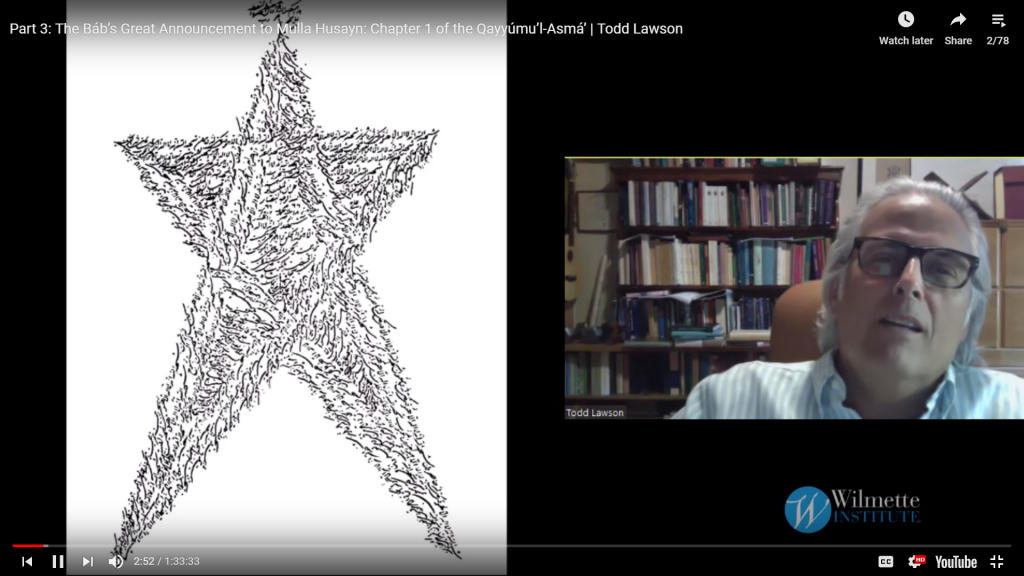 I’ve never have heard anything quite like Todd Lawson’s presentation before and I thank you for having captured this fragment of his knowledge for all of us and for posterity.

I’m astonished and thrilled that such information is available and only wish I had all the background needed to grasp the full import of everything Mr. Lawson had to say.

As with Kevin Locke, Todd Lawson seems to have not only a studied and academic understanding of his subject in every detail, but also a native gift for bringing the subject to life with such luminosity and endless fascination for what he knows after years of investment.

I don’t think that I’ve experienced anything more engaging and challenging in any classroom, anywhere. How amazing that somebody of his calibre has taken the time to pass this along to people like me, who are not scholars but, all the same, thrilled to hear a fuller background and wider exposition of the Báb’s power and gift to humanity.

I’ll be listening to this again and again and meanwhile trying to learn more on my own. Deep gratitude to Wilmette Institute and Mr. Lawson for this mind-expanding set of webinars.

Mike Centner Reports that He Now Sees the Story of Joseph “All Over the Place.”

I wanted to write a few, not quite final, thoughts on the Surih of Joseph and its place in the Bahá’í Revelation.

Similar to the phenomena of learning a word for the first time and subsequently hearing it everywhere, hearing echoes of the story of Joseph have now become a common occurrence. I sometimes listen to Christian radio and occasionally one of the preachers will review Genesis and the story of Joseph. The moral of the story is more often than not “what you meant for evil, God meant for good” and while this is certainly true, the meaning of Joseph as a type of Christ (Manifestation) is often missed. The interpretations are relatively shallow, like a wading pool.

Throughout this course I have constantly been surprised by realizing that there are great truths in the smallest details. In the story of Joseph in both the Bible and Qur’an he is imprisoned in the company of the Pharaoh’s butler (wine carrier) and baker. It had never occurred to me to wonder why they were imprisoned. It wasn’t until I read an online remark that I realized that the Pharaoh had been, or suspected he had been, poisoned and the source was either his wine or bread. The investigation apparently takes a few days and it is decided that the baker was guilty and he is subsequently executed. I am conditioned by now to think of the underlying symbols of the story, and wine and bread are among the most common in the Bible. How, or even if, they are symbolic in this story is something I am still meditating upon.

Charles Hall Reports that The Qayyumu’l-Asmá Course was Unique for Him.

After 41 years as a member of the Bahá’í Faith (and 25+ Wilmette Institute courses) I have never (that was never) felt so close to the Báb than I now feel having experienced this class (in addition to the earlier course on the Bayán). I’m not a very good student so on an academic level I have work to do, notes and resources to review before I can share at that level. On the other hand, the material and its presentation so excited that part of me which is closest to my Lord.

My dictionary does not have the words or the definitions that can properly express how this course has brought me closer to the Báb and accordingly to our Beloved. What I have gained is the feelings I want to take with me as I share the Message of Bahá’u’lláh with my friends, neighbors and my community.