↓ Skip to Main Content
Home › Courses › The Badí‘ Calendar and Naw-Rúz: Learning That Keeps On Giving

The Badí‘ Calendar and Naw-Rúz: Learning That Keeps On Giving 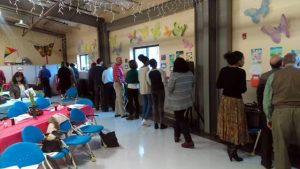 Tamara Bond-Williams, a Bahá’í from Poughkeepsie, New York, may be a familiar name to some of you. She was a learner in the November 2015 Badí‘ Calendar course (faculty William Collins, Nicola Daniels, Mark Lutness). Her project for the course was a narrated PowerPoint entitled “The Badí‘ Calendar: A Look at Its Liturgical Significance” (click on the triangle in the lower left corner of the slide to watch it). An amazing part of the PowerPoint is the concluding four-stanza hymn about the Badí‘ calendar that Tamara and her husband Chet Williams wrote (and she sings), accompanied by music composed by her husband, a church musician. Before and after each stanza one sings a chorus with the names of the nineteen months and Ayyám-i-Há. Tamara’s project for the calendar course was a feat in itself. But what she learned in the course did not stop when the course ended. She volunteered to use her learnings about the Badí‘ calendar to make a festive Naw-Rúz celebration for her community.

“I volunteered to do a presentation of the Badí‘ calendar as part of our Naw-Rúz celebration and, as part of that presentation, asked two artists in our community (Nancy Ewing and John Watson) to create artistic renditions for each of the nineteen months of the calendar. I gave them my presentation from the Wilmette Institute’s Badí‘ Calendar course as a guide [see the link in the introductory paragraph above].  However, when preparing for the rest of the presentation, I discovered that some of the information I intended to share was too dense, when many in the community were still grappling with the fact that dates had changed and were unclear as to why. Besides that, I was actually not well (I was at the tail end of a really severe cold). So I simplified the presentation, giving out Gregorian perpetual calendars and resources so those present could find their birthdays on the Badí‘ calendar and reflect on how the Badí‘ calendar (like the astrological one) had the traditional four elements (fire, air, water, and earth), but that, rather than thinking about them as determinative (horoscopes), we could think of them as aspirational. The calendar enables us to reflect on attributes of God every day and what better day for sincere reflection than our own birthdays. 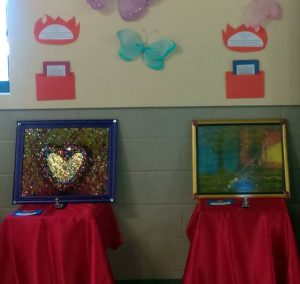 After the presentation, all the attendees were invited to walk around the room and experience the art on display. Under each month was the verse from the Du’a Sahar (a prayer from Shi’a Islam attributed to the Fifth Iman and also known as Du’a Bahá. The prayer is said daily at dawn during the month of Ramadan. It has twenty-two verses—each addressed to God under a particular attribute or Name of God—the first nineteen attributes of which the Báb adopted for the Badٕí‘ calendar). Having explained the Du’a Sahar during the presentation, I encouraged the participants to recognize that the art walk was also a prayer. Finally, I invited participants, if one attribute particularly spoke to them, to take a prayer from under the art—these were prayers or Bahá’í writings pertaining to each month—and at the end of the program I invited people to read the prayers they had chosen. We had fifteen out of nineteen attributes read at the end. We concluded by singing the fire verse from the calendar hymn that my husband and I composed for Badí‘ calendar course project.

In all, it was not quite how I had planned it, but it was well received and gave everyone an opportunity to engage the Badí‘ calendar in a new way.