The Wilmette Institute’s first Web Talk for 2017 will take us, once again, to the state of South Carolina. Author Annette Reynolds’ talk on “Trudy and the Bahá’í Spiritual Path in South Carolina” will take place on Sunday, January 22 at 2 p.m. Eastern Standard Time (11 a.m. Pacific, 8 p.m. Western European time). To listen to the talk live and to be able to participate in the question-and-answer session, you need to sign up for the free talk here. 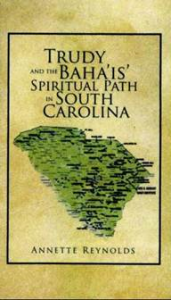 Annette says that she set out to write the memories of Trudy White, a selfless and devoted friend and mentor, but, in the process, she discovered about ninety-nine others who also had precious memories that they wanted to share. This prompted her to write Trudy and the Bahá’ís’ Spiritual Path in South Carolina (a self-published book by Xlibris available in hardcover, softcover, and ebook formats). It is a true story that provides a glimpse into South Carolina’s Bahá’í activities beginning in the mid-1960s in Adams Run, South Carolina. Including personal narratives, news stories, and archival research, the story Annette tells revolves around the memories of Trudy White, a selfless devotee of the Bahá’í Faith. Bahá’ís in South Carolina and from around the world contributed stories of traveling with Trudy and sharing the Bahá’í Faith with those whom they encountered. Also, Bahá’ís from around the world were interested in and visited South Carolina throughout the story’s time frame. Reynolds’ experiences as a native of South Carolina, as well as other South Carolinians, add local flavor to the story. 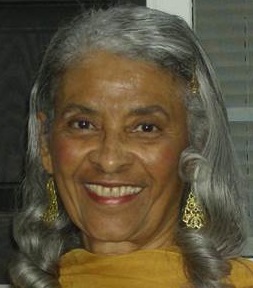 Annette Reynolds is a mother, grandmother, and a career 4-H agent (County Extension Agent), who after thirty years of service retired as cluster director. She has worked and lived in all parts of South Carolina. She joined the Bahá’í Faith in 1971 and continues to serve the Bahá’í Faith in a number of capacities. Since the mid-1970s, she has been volunteering to help prevent domestic violence. She is working on her second book titled “Survivors Thrive” to be published in the spring by Prysmatic Dreams Publishing. Inspired by true stories of survivors who thrive, the book presents one view of the battered women’s movement’s work toward one path to peace—elimination of domestic violence. In this view abused women are some of the smartest, strongest, and most courageous, creative, and resilient women in the world.

All Wilmette Institute Web Talks are free and open to the public, but they require you to sign up in advance. Check “Web Talks/Webinars” in this issue; or watch for flyers and announcements; or keep checking http://wilmetteinstitute.org and then clicking on “Web Talks.”

The Web Talks use a system that transmits audio and video of the speakers and the PowerPoint slides that speakers generally use. Audience members listening to the live broadcast can comment on the talks and ask questions by typing them into a “chat” box. Anyone viewing the talk at a later date will hear the questions and answers from the live broadcast.

After a live Web Talk is given, it is generally posted on the Wilmette Institute’s YouTube channel, usually within 24 hours, where you can access 2015 and 2016 Web Talks. The Institute will upload 2017 Web Talks, including this one by Annette Reynolds, after they are given.