The Best Religious Building: The Baha’i Temple by Hariri Pontarini, in Santiago

The following three paragraphs came from a Facebook post that has since disappeared and thus we cannot give you the source. The paragraphs are interesting in themselves, but you will want to click on the link to Siamak Harari in the third paragraph to read Noah Richler’s article “Chile’s Poetic Bahá’í Temple by Harari Pontarini [Siamak’s architectural firm]” published in the March/April 2016 issue of Azure. Richler has much to say about Siamak’s thinking about and the building of the Temple. You will definitely want to see the amazing photographs illustrating Richler’s article. 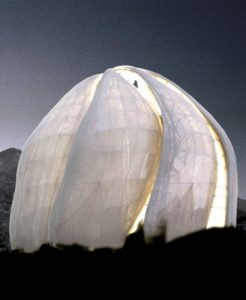 “Thirteen years in the making, the Bahá’i Temple in Santiago has finally opened and it is a masterpiece; an iridescent jewel that sits among the Andes foothills with views of Chile’s largest city below. Its nine walls, which appear more like petals or billowing sails, surround a single room and a mezzanine. Inside, visitors and worshippers look 30 metres up to see those translucent walls spiral into a single glass oculus.

“The temple is the creation of Siamak Hariri, founding principal of the Toronto firm Hariri Pontarini. For Hariri, who grew up Bahá’i, this project is deeply personal and he devoted himself and his team to realize it with exacting detail. The walls, held in place by an exoskeletal web, are comprised of two layers of panels: white Portuguese marble on the interior and custom glass on the exterior. Because the site is prone to earthquakes, each of the 2,000 cast panels had to be tested for seismic resistance, to ensure they could accomplish one on the few requirements outlined in the competition: to ensure the building can last 400 years.

“In Azure’s March/April 2016 issue, writer Noah Richler spoke to Hariri about what he hoped to accomplish with the project. ‘There are a lot of ways in which monumental architecture deliberately seeks to make people feel small,’ he said. ‘I want the opposite.’”