The Story of Stuff—A Bahá’í-Inspired Program for Youth

The well-being of any segment of humanity is connected with
the well-being of the whole. When economic gain is pursued
without regard for how the natural environment is
affected, for instance, all are impacted.
————————Bahá’í International Community

The popular website The Story of Stuff recently posted a Bahá’í -Inspired Program for Youth on its website. This newest addition to The Story of Stuff’s website is a “six-session curriculum from a Bahá’í perspective that helps youth explore the relationship between their consumption, their health, and the health of the planet.”

The Story of Stuff began in 2007 with a 20-minute animated documentary “about the life cycle of material goods” that is “critical of excessive consumerism and promotes sustainability.” The website’s resources also includes faith-based programs for Jewish and Christian teens, as well as one in French for high school juniors and seniors taking French classes.

How Did the Bahá’í-Inspired Story of Stuff Come About? Participants in the Wilmette Institute courses on Climate Change and Sustainable Development and the Prosperity of Humankind frequently expressed the need for materials for youth that would help them cope with the consumerism and the materialistic lifestyle prevalent in society. They thought that it was important for youth to learn about the connections between consumerism and the destruction of the life-support systems of the Earth as well as about the hidden suffering they cause to many people. About two years ago, three participants of the Wilmette Institute course on Climate Change decided to take action.

Sue Blythe (Florida), Barbara Nakai (Arizona), and Christine Muller (Rhode Island) collaborated by email and Skype to create a Bahá’í-inspired course based on the popular video The Story of Stuff, which literally explains the story of all the stuff we are using: Where does it come from? How was it produced, and at what cost to people and to the environment? Do we really need all that stuff? What happens to it after we throw it away?

The topics discussed in the Bahá’í-inspired course are tangible examples of the issues raised by the Universal House of Justice in its March 1, 2017, letter Comments on the Path to Economic Well-being. In its letter the House of Justice reminds us to exemplify spiritual qualities such as contentment and moderation and then continues:

The forces of materialism promote a quite contrary line of thinking: that happiness comes from constant acquisition, that the more one has the better, that worry for the environment is for another day. These seductive messages fuel an increasingly entrenched sense of personal entitlement, which uses the language of justice and rights to disguise self-interest. Indifference to the hardship experienced by others becomes commonplace while entertainment and distracting amusements are voraciously consumed. The enervating influence of materialism seeps into every culture, and all Bahá’ís recognize that, unless they strive to remain conscious of its effects, they may to one degree or another unwittingly adopt its ways of seeing the world.

The Bahá’í-Inspired Story of Stuff aims to help youth to understand and put in practice the guidance of the Universal House of Justice. It illustrates how our world is interconnected and sheds light on “the social conditions of every people” and “their circumstances.”

The Story of Stuff project staff gave the Bahá’í team permission to use the already existing faith-based program for Jewish and Christian teens. The Bahá’í team chose to use the same six-session format of the earlier programs and many of the original activities; but, to incorporate Bahá’í perspectives, it also replaced all the spiritual texts, rewrote introductory texts and many instructions, added a few short videos, and opening and closing prayers. The new course is interfaith in spirit and inclusive of young people of other faiths. Its materials show equal respect for all religions and teaches that all people worship the same God, just with different names, and that the core spiritual teachings, such as stewardship of the earth and loving and caring for our fellow human beings, are the same in all religions.

How Have Youth Responded to the New Course, and What Do the Six Units Contain? To date, the materials have been tested twice—once in Arizona and once in Rhode Island. Experiences and feedback from both groups were incorporated in the materials.

In Rhode Island, six youth, ages 9–13, participated in the Story of Stuff: A Bahá’í-Inspired Program for Youth in a private home in North Kingstown. Two of the youth were Bahá’ís. The materials are designed for 12–15 year olds but are easily adaptable to different ages and circumstances. In the six sessions, held on Friday afternoons in January and February 2018, the youth explored the Story of Stuff with a wide variety of activities. At the beginning of each session they listened to various renditions of a prayer by Bahá’u’lláh:

In the first session, the youth reflected about the beauty of Creation and our role as Earth stewards. In the second session, they studied the whole Story of Stuff, from cradle to grave and its impact on people and the planet. They learned about the Golden Rule as it is expressed in all religions: We should do onto others as we wish they would do onto us. In this session the youth had an especially passionate discussion. 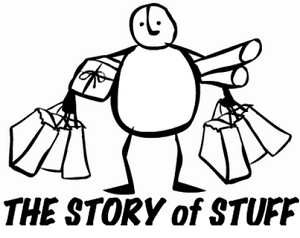 In the third session the group studied the production of clothing, jewelry, electronics, and cosmetics in small groups and were confronted with the true cost of production: the destruction of ecosystems, the poisoning of workers, and the release of toxins into the environment. The group studied the origins of T-shirts and estimated the true production cost of a single T-shirt to be $100!

In the fourth session the youth learned about how advertisements manipulate us to keep consuming. They discussed moderation and that lasting happiness does not come from material stuff. True happiness comes from spiritual things we cannot touch, such as love, friendship, creativity, learning, generosity, and service. The youth did skits about manipulative ads and reflected on how we can think for ourselves, reduce our consumption, and lead more meaningful and happier lives. One of the youth mentioned that she is feeling more at peace now. When asked why, she explained that she feels free from the pressure of having to get all that stuff. 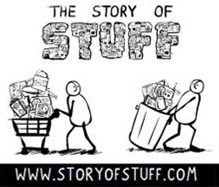 In the fifth session the group learned where our stuff goes when it leaves our hands, how the waste is harmful to people, especially electronic waste, and to wildlife, especially plastic. The youth conducted a memorable garbage audit and discussed how we can all reduce the amount of stuff that we throw away.

In the sixth and final session, the youth consulted about a service project. They came up with and unanimously decided to work for a plastic-bag ban in their town, which is quite an ambitious project for nine- to thirteen-year-olds. The enthusiasm and perseverance that the participants showed—there was almost 100 percent attendance in the six sessions—are good prerequisites for tackling this challenging issue. The group has already attended a North Kingstown Conservation Committee meeting, is working on a letter to the editor for the local newspaper, and will meet again in early April to consult further on their actions.

Now It Is Up to You! Now that the Story of Stuff: A Bahá’í-Inspired Program for Youth has been posted on the Story of Stuff website, everyone can use it with an existing or new Bahá’í-inspired youth group. Teachers and facilitators do not need to have any previous knowledge, as the program provides detailed instructions in the Introduction and in each session plan. Download the course materials, and begin planning your sessions with youth. Please let us know how your sessions go and what service projects they engender. Also, feel free to ask any questions and to make suggestions. Contact bahaistoryofstuff@gmail.com.