Three Bahá’ís were honored at the New Shape Forum, a gathering of the Global Challenge Foundation held in Stockholm, Sweden, on May 27–29, 2018, with a New Shape Prize. The Bahá’í honorees include 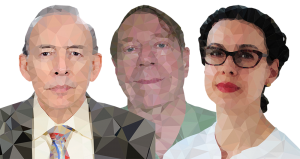 The Bahá’í proposal, “Global Governance and the Emergence of Global Institutions for the 21st Century,” was one of three proposals selected from fourteen finalists. The Bahá’ís received USD 600,000 in prize money. The New Shape Prize initiative has “an ambitious goal:

to inspire ideas and stimulate debate around new, more effective forms of global cooperation at the highest levels about how the world community manages global catastrophic risks, ranging from climate change effects to weapons of mass destruction.

supporting the reworking and refinement of the best ideas toward more holistic models that emerge from this process. Working groups began to convene at the Forum and will continue to develop frameworks for global governance. We are confident the models will evolve over the next five months, and look forward to seeing these ideas come to life, when the most promising ones will be presented in Paris in November at the Paris Peace Forum.

The other two New Shape prizes were awarded to the following, each of whom also received USD 600,000:

Professor Maria Ivanova, who led the panel that selected the finalists, said that “This competition has unleashed the creativity of thousands of people around the world and has launched a new community of thinkers, advocates and doers.”

Congratulations to the winners.