Diana Mogrobejo. Diana Mogrobejo, who hails from Key West Florida, USA, has clarified to her community “the role of the Bahá’í artist in the Bahá’í community and the importance of recognizing their contribution to the Faith in the Five Year Plan. She has already undertaken three community activities, two of which involve core activities:

Diana came out of the course trusting the process that Bahá’u’lláh, ‘Abdu’l-Bahá, Shoghi Effendi, and the Universal House of Justice have “prescribed us.” She feels that she has “more solid tools and feels more confident”; she plans to apply what she has learned in children’s classes, youth groups, study circles, devotionals, and in just any moment in everyday life.”

Keith Mellard. Keith Mellard, a Bahá’í of thirty-eight years and a Yorkshireman who lives in Aberdeen, Scotland, in the United Kingdom, began his reflections on the course on The Bahá’í Faith and the Arts by saying that he found the comments by his fellow learners “very interesting, informative, and educational.” Then he followed with a comment that takes away with one’s breath: “That so many people, from so many places, so many different cultures, with similar basic religious beliefs can inform the work we do with such depth and character is confirming to experience.” 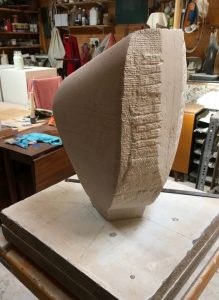 Some of Keith’s ideas that he is putting to work are these:

Diana and Keith at Work. While finding new ways to enhance their Bahá’í communities, both artists are hard-working professionals. Diana is “working on a collaborative project that she will be presenting to her Key West Bahá’í community in July; after receiving feedback, she plans to make a second presentation to the Key West community at large. The project is a series of paintings called ‘The Metamorphosis of the Soul.’” She says that the spring season “has been very special for me because I have a garden, and with . . . my friend we are growing butterflies. It has been such an amazing experience: . . . that beautiful process of caring for the caterpillars, feeding, protecting them, seeing how they formed themselves in the chrysalis, and finally seeing them turning into a beautiful monarch butterflies and setting them free. All this experience connected my soul immediately with the clear messages from the material” selected for the course. She goes on to say that she feels strongly “that this new project . . . will end up opening new doors for the spreading of the Faith in this area and might inspire other artists to investigate the Bahá’í writings and feel the support of the Bahá’í community.” She ended by explaining that “the purpose of ‘The Metamorphosis of the Spirit’ is to show how the new revelation of God can transform the human spirit and show the ways we can be part of the progress of humanity using, perfecting, and sharing our talents.” 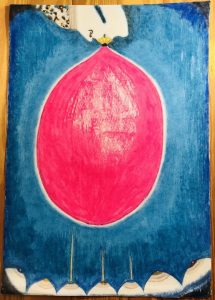 Prejudice and Perception by
Diana Mogrobejo, inspired by
a 2013 Baha’i Summer School

Diana is also working on a second project—a collage titled “Prejudice and Perception,” hoping that it will convey “what the Bahá’ٕí writings teach us about that particular spiritual illness. My goal is to create awareness and hopefully touch people’s hearts so they can feel appealing to read more about the Bahá’í Faith.”

While Keith was waiting for The Bahá’í Faith and the Arts course to begin, he said that he “had had an idea for a thing to make that (I hoped) would reflect what had happened in the intervening time. So the work was begun. It turned into a commission, which was initially irritating due to a delivery date being important in terms of what the client was hoping to do with it. . . . the idea came from contemplation of a calligraphic work by The Báb.”