Video webinars are now commonplace. But a webinar sponsored by the U.S. Department of State’s Bureau of Educational and Cultural Affairs and organized by the Northwest Community College Initiative (NWCCI) program, with their new Community Partner the Washington Bahá’í History Museum arranging for international guest speakers? That is something special and a new way for Bahá’ís to participate in the important discourses of our time.

The webinar conference, which was held on May 16, 2015, was called “Thinking Like an Entrepreneur!” The State Department’s Bureau of Educational and Cultural Affairs and Edmonds Community College (ECC) and its partner community colleges Whatcom and Pierce, all three located in Washington state, were unable to come up with speakers for the conference in a timely manner and appealed to the Washington Bahá’í History Museum, which has a long collaboration with ECC, for help. They knew those working at the Museum could find international speakers quickly. 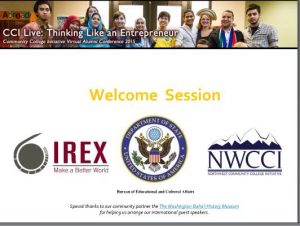 Within seventy-two hours the Museum personnel had arranged for six speakers, five of them Bahá’ís: Dr. Roy Steiner (the United States), Dr. Mohan Narula (Mongolia; he participated from midnight to 4 a.m.), Leyla T. Haidarian (a “spiritual” refugee to Africa; a keynote speaker), Vivian Argeuta Bernal (Colombia), Tabata Amaral de Pontes (Brazil; arranged with the help of the Brazilian Consulate in Seattle), and Dr. Iraj Abedian (South Africa). Other speakers, some Community College Initiative alumni, came from Columbia, India, Indonesia, Pakistan, and the United States. Information on all the speakers can be found at http://ccilive.learningtimesevents.org/presenters/.

The webinar, which originated in Washington, D.C., had moderators in Edmonds, Washington, at Edmonds Community College, and in Washington, D.C. It took place from 8 a.m. to 12 p.m. Pacific Daylight Time. The presentations were all live, which enabled CCI alumni to interact with each other and with the guest presenters via moderated forums and discussion boards. Because some of the presentations took place simultaneously in separate “rooms,” they were all recorded to enable leaners to listen later.

Topics covered leveraging skills in uncertain economies; guiding principles for a life of service; writing grant proposals; social entrepreneurship; ensuring success through meaningful relationships and bonds of friendship for professional development; building effective teams and bringing together different people; and making the economy work for the poor with reference to the role of ethics

The hundreds of conference attendees, all graduates of the College Community Initiative (CCI), came from all over the world: Bangladesh, Brazil, Brunei, Canada, Cameroon, Costa Rico, Cote d’Ivoire, the Dominican Republic, Egypt, El Salvador, India, Indonesia, Kenya, Nicaragua, Pakistan, Panama, South Africa, Tunisia, Turkey, and the United States. Of those who evaluated the conference, some 69 percent rated it Very Good, and 31 percent, Good

NWCCI’s program is part of the Community College Initiative, which, collectively, has some 2,400 alumni in sixteen countries. CCI’s goal, according to its publicity, “is to strengthen other societies by developing capable young professionals who graduate from the program having acquired professional skills, leadership abilities, and an understanding of American society, democracy and culture. To achieve these objectives participants are enrolled in an academic certificate program and a cultural learning program designed to introduce them to aspects of the cultures of the United States and to provide opportunities to share their culture with the college and local communities.” Chosen participants “come to the United States for ten months of professional training and cultural activities.” Edmonds, Whatcom, and Pierce community colleges are in their sixth academic year in the NWCCI program.

The Washington Bahá’í History Museum has been working with Edmonds Community College in the CCI program since 2012. The Museum has provided a number of speakers, some Wilmette Institute faculty, in person and in webinars, in courses such as cultural anthropology, philosophy, and business management. Its collaboration with NWCCI on the worldwide entrepreneur conference was its first as a Community Partner. Christina Fusch, an Edmonds Community College faculty and part of the NWCCI, is also on the Board of Directors of the Uniting Hearts Networking Institute, which oversees the Washington Bahá’í History Museum. After watching the success of her cultural anthropology students in their work at the Museum and of the online webinars in her classes and the classes of colleagues at Edmonds Community College, Ms. Fusch recommended the Bahá’í History Museum because she was sure it could find speakers on short notice. She was also instrumental in recommending that the Museum become a “Community Partner” with NWCCI and the State Department’s Bureau of Educational and Cultural Affairs in April 2015.

The Washington Bahá’í History Museum, in its new capacity as a Community Partner, will continue to work with Edmonds Community College and with the Northwest Community College Initiative. It is also working now on a Global Webinar Speakers Bureau.

Since the conference, several attendees have contacted the Bahá’í speakers for further information. Others from Mongolia and Brazil have befriended on Facebook a woman who works at the Washington Bahá’í History Museum for conversations about the Bahá’í Faith.

However excited the Bahá’í History Museum is about the success of the entrepreneur conference and their new status as a Community Partner with NWCCI and the Department of State’s Bureau of Educational and Cultural Affairs, it never rests on its laurels. It continues to excel in its offerings to Edmonds Community and other local colleges and to build its resume in order to be ready when other doors open.

For a link to an article on the many services of the Washington Bahá’í History Museum, click here.