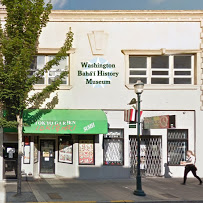 The Bahá’í History Museum is organized with a number of sections. One section bridges the gap between secular historic events and trends and a larger ideological framework that is informed by serious religious considerations, including principles of the Bahá’í Faith with which the museum-goer may identify. Another section offers exhibits presenting the tenets of the Bahá’í Faith and includes many artifacts related to the Bahá’ís who brought the Bahá’í Faith to the Pacific Northwest in 1905 and the Seattle Bahá’ís who have taught and traveled all over the world. This part of the Museum includes a comfortable lounge and discussion areas for informal conversations. Hence a visitor progresses through a general ideological set to a Bahá’í-focused presentation to relaxed conversation with volunteer docents. The library, another part of UNHI, is available for follow-up visits and research; it includes reading resources, an interactive, online teaching tool called “Heart to Heart,” and various online resources.

The History Museum also provides a smorgasbord of programs for Bahá’ís and non-Bahá’ís of all ages and programs providing “common-interest links between the Bahá’í community and the community-at-large,” hoping to “contribute to improving our society.” This year in April 2015 the Museum celebrated its first year in its new location and is proud of being responsible for several enrollments of new Bahá’ís this year alone. 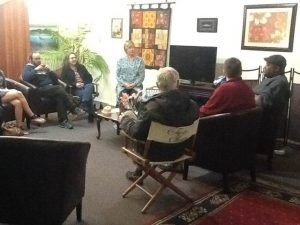 Open four hours a day, four days a week (Tuesday, Wednesday, Saturday, and Sunday, plus two additional hours each on Saturday and Sunday evenings, the History Museum hosted some 900 visitors during March and more than half of April. It is staffed by 23 volunteers (a mix of seniors and Boomers) who donated more than 400 hours during the same period of time. The volunteers give tours, talk to visitors, do research, help with the Museum’s upkeep, and have tea with visitors and students.

Recently the Museum joined the Chamber of Commerce in the University of Washington neighborhood to take advantage of new opportunities and to find new ways to engage in public discourse. The Museum is also a member of the Seattle area Trip Advisor and is presently listed as number 56 out of 505 tourist attractions in Seattle, a distinction that brings visitors for tours and conversations. One result of the Trip Advisor brochure is a fourteen-year-old boy from Des Moines, Iowa, who visited the Museum with his parents, went back home and consulted with Bahá’ís there, and enrolled as a Bahá’í.

A very successful service that the Washington History Museum offers involves collaborations with local colleges and universities including the University of Washington, Seattle; Edmonds Community College, Lynnwood, Washington; and Everett Community College, Everett, Washington. This is made possible by UNHI’s emphasis on the separation of church and state. Some twelve college or university students per quarter devote thirty hours to studying Bahá’í culture and its contributions to society as part of their college course work. The Museum develops curricula suitable to the students’ courses, sometimes using textbooks and sometimes the curricula and syllabi of the One World Academy. The students also take part in One World Academy webinar lectures, which are often a required part of their course work. The students are expected to do five to eight interviews of Bahá’í volunteers at the Museum, those attending Bahá’í devotionals, Bahá’í visitors from around the world, or Bahá’ís attending open-mic nights. The college students often participate in weekly firesides, sometimes bringing family and friends. Some 175 students have studied in the Museum over the last three years for a total of some 5,250 study hours.

The value of the Washington History Museum’s programs for college and university students is reflected in a letter written by Christina Fusch, adjunct instructor of anthropology and business at Edmonds Community College: “For the past several years the Washington Bahá’í History Museum has played an instrumental and integral role in advancing discourse in my classrooms and on campus. I would like to particularly highlight their focus on human rights, education, and religious freedom issues. The museum has become a vital part of my course curriculum. . . .”

Ms Fusch went on to say: “For instance, in my cultural anthropology class my students must select a group to study norms and customs. The students must engage in participant observation—a well-known anthropological technique—where they must interact and learn by doing. The Washington State Bahá’í History Museum has been very gracious and open to my classes, allowing students of all faiths to explore from an academic perspective the Bahá’í religion and major global issues of today. . . . The students have been conducting academic research on [the] Bahá’í religion, human rights, denial of education, and religious freedom from primary sources such as community leaders, first-hand witnesses, academic scholars, and people who experienced these issues. This is a unique and great opportunity that most anthropology students do not get access to until graduate school. Our college is very grateful to the museum and [the] local Bahá’í community for the selfless hospitality, opening their doors to global dialogue, and asking nothing in return. 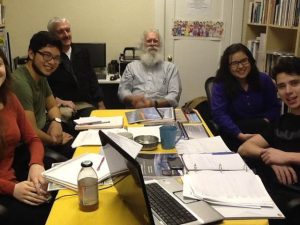 Recently the Black Box Theater, a new home for three Seattle theater companies, has offered the Bahá’í History Museum and the international student body of Edmonds Community College (ECC) its space for three presentations per quarter with the understanding that presentations be live and international. One presentation per quarter will focus on human-rights violations and Education Is Not a Crime. At each presentation the History Museum mounts an exhibit about the Museum with invitations to the Museum itself. The ECC students promote Bahá’í speakers on their ECC website, in the ECC newspaper, and in local newspapers. The ECC students attend Bahá’í devotionals, Education Is Not a Crime events (on campus and at the History Museum), and do interviews.

Three years ago the Bahá’í History Museum launched “In Class Sessions” in local colleges and universities, some speakers presenting in person and some via webinars, and all in courses for credit. To date, presentations have been made in courses in business management, global studies, Middle Eastern studies, philosophy, cultural anthropology, to name a few.

The History Museum is also used for Speakers’ Bureau luncheons with speakers drawn from the Humanities of Washington speakers’ list. When the Museum is open and no formal programs are in session, it switches to a Mediation and Quiet Zone for students and for anyone who wishes to enjoy quiet time for reading and meditation. During such times, the Museum offers New Age music and provides access to Bahá’í writings for meditation. For the homeless in the Museum area, the History Museum gives out Blessing Bags and knitted hats and offers tea and coffee and intimate devotionals during its weekly open hours. It also offers limited referral services to the homeless.

For Bahá’í and non-Bahá’í children, the History Museum offers storytelling (it has two storytellers) when parents bring small children to the Museum. The Museum has begun to work with the University Prep Academy and a nearby Head Start program, and it plans to reach out to nearby middle schools. But these programs are not as advanced as the college and university programs.

Firesides, formerly given by well-known Bahá’ís, are now being planned fifty-two weeks in advance in a program called “From Presentation to Conversation.” Ordinary Bahá’ís, youth and veteran adults working together, are given two months to prepare a talk with aids, slides, and video clips. The presentations are to center around three key issues that will be used to start a group discussion. As of this writing, eight speakers are working on fireside talks. 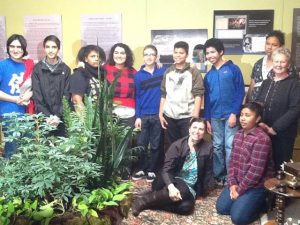 Programs appealing to youth and adults are myriad: community devotionals; group study of Wilmette Institute courses; workshops for the Coalition of Racial Healing (once a month on a Friday); open mic for the arts (every third Sunday night); Education Is Not a Crime programs. A recent addition to the programs is a Museum Café Dance, a small, fun, get-away date night with a DJ and grapes, cheese sushi, and Martinelli’s apple juice. On Saturday afternoons when they are not performing, Native Americans (Tlingit) practice dancing.

The Uniting Hearts Networking Institute is managed by a seven-person Board of Directors. UHNI owns the artifacts in the Museum, the library holdings, the archival materials, and the artwork in the Museum. UHNI’s nonprofit status allows it to work with educational schools, colleges, and universities. The Spiritual Assembly of the Bahá’ís of Seattle contributes some 10 percent of the Museum’s overhead; the Board of Directors raises money for the rest of the operating expenses of the Museum and of UHNI.

The Museum first opened in 2012 in the Eastside Bahá’í Center in Bellevue, Washington, during the centenary of ‘Abdu’l-Bahá’s visit to North America. Its mission was defined by its relationship with the nearby Edmonds and Everett community colleges (located in Lynnwood and Everett, Washington, respectively) and with a wish to combine the history of Washington state, the United States, and the Bahá’í Faith in conversation and dialogue with the surrounding communities.

Buoyed by the Museum’s success with outreach to high schools and colleges and to migrant communities, the Museum’s Board of Directors in January 2014 leased a building in the University District in Seattle, one block from the University of Washington. Volunteers and college students painted, decorated, and planned new exhibits; planted the atrium; and moved books (the students were working for college credit as part of a cultural anthropology class through Edmonds Community College). The Museum formally opened in its new quarters in April 2014. At the end of 2014 the National Spiritual Assembly of the Bahá’ís of the United States asked the Spiritual Assembly of the Bahá’ís of Seattle and the directors of UNHI to consult about cosponsoring the History Museum.

The Museum’s new mission has three goals: to contribute to transformational changes in society that improve the prospects for global peace and for lives lived in an environment characterized by a commitment to the unity of the human race; to stand as a highly creative umbrella organization providing services to the community through a variety of educational activities and service-related outreach; and to provide a range of educational resources that familiarize the larger community with the fundamental tenets of the Bahá’í Faith.

On April 12, 2015 the Bahá’í History Museum celebrated its first year on “The Ave,” as the street near the University is lovingly called. It welcomed more than two hundred visitors, including entertainers, and offered refreshments and tours. The highlight of the event was the performance by thirty Náaku dancers (members of the Northwest’s Tlingit tribe). They announced that the Museum was their Sacred Place and asked those present to embrace them as part of their family. Other entertainers, including African Americans, Persians, and children, entertained throughout the day with jazz, country music, Persian chants, and sing-alongs. The celebration ended with an evening of dancing and refreshments.

The Washington Bahá’í History Museum is located at 4341 ½ University Way NE, #210, Seattle, Washington 98105. Hours are 11 a.m. to 3 p.m., Tuesday, Wednesday, Saturday, and Sunday, as well as 7–9 p.m. on Saturdays and Sundays. Its website is http://bahaihistorymuseum-wa.org/. Other websites of interest include www.oneworld-academy.org (for students) and www.hearttoheart.co (for visitors and teachers to engender conversations). If you are visiting Seattle, be sure to check out the Museum’s entry in Seattle’s “Trip Advisor.”