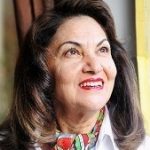 From time to time the Wilmette Institute has experimented with courses that combine on-site presentations and on-line units. In September and October 2017, the Institute partnered with Spiritual Assemblies in Saskatoon and Edmonton, Canada, and offered combined courses with two Wilmette

Both Saskatoon and Edmonton hosted the all-day workshops. One was called “A New Race of Couples,” a workshop on marriage for couples. The second workshop was “Conscious Courtship.” It was geared to singles who were preparing themselves to find a marriage partner. The materials and exercises used in both courses utilized guidance from the Bahá’í writings as well as up-to-date research and therapeutic experience in the field.

Both workshops, which covered materials that are viscerally and spiritually relevant to Bahá’ís and to society as a whole, dealt with life-engaging topics that lent themselves to in-person, hands-on workshops. That made the facilitators eager to see how coupling on-line courses with live workshops would be received.

Couples who attended “A New Race of Couples,”
a workshop on marriage for couples in Saskatoon, Canada

The Switzers were very pleased to find that the workshops were very well received. In Saskatoon, the “Conscious Courtship” group was made up of mostly mature singles between the ages of 35 and 65, while in Edmonton the group included individuals between 14 and 25. According to the participant evaluations, both groups got a lot out of the very interactive, one-on-one exercises. As has been the Switzers’ experience in Europe, they found that, in interactional exercises, the youth get very involved; and, while finding it different from their usual relational experiences, they increase their ability to connect with the opposite sex. The workshop contributed to their skills in engaging in meaningful conversations generally. One significant outcome for the youth in the Edmonton singles group was that quite a few of those who started from a point of feeling not ready for marriage shifted significantly to be actively preparing for it. 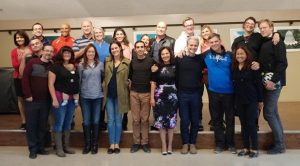 Couples who attended “A New Race of Couples,”
a workshop on marriage for couples in Edmonton, Canada

The couples in both Saskatoon and Edmonton felt their marriages were enriched by the experience and expressed gratitude for the practical as well as theoretical nature of the workshops, which helped them develop useful skills in communicating and understanding the dynamics of the marital relationship. As it turned out, the online component conflicted with the very busy period of pre- and post-activities related to 2017 Bicentennial celebrations. Hence, unfortunately, the goal of combining the on-line and in-person component was compromised. However, the presenters said they came away with some new insights and ideas about going forward with in-person and on-line courses. Overall, the Switzers, who were on holiday in Western Canada, pronounced the workshops “a rich experience.”

Students in the four workshops concurred. One said, “I would like to thank the Spiritual Assembly for sponsoring the Switzer’s weekend here and making it available to anyone interested. The Saturday workshop was superb. Very high caliber. And the support . . . was exceptional before and during the workshop.” A participant in the “Relationship” and “Conscious Courtship” courses had this to say: “As it was said at the Friday night introduction, there is a high need for this kind of education in our wider community, and I recommend looking into offering these kinds of workshops, perhaps using resources in the community.” Yet another participant observed that “For some people it ‘was the first time’ they were able to share their feelings in a ‘safe and nonjudgmental environment.’”

Youth who attended “Conscious Courtship,” a workshop
for those preparing for marriage in Edmonton, Canada

The Wilmette Institute Marriage Team has experimented with in-person/on-line courses before. The first one was Creating a Coherent Marriage, Family, and Community Life in 2016 with the in-person portion at Green Acre Bahá’í School with Hoda Kemp and Alex Blakeson. In 2017, the faculty collaborated with the Bahá’í Regional Council of Southeast Brazil to present the same course in Portuguese with two Brazil-based faculty members, Fariba Vahdat and Nahid Shams. The Wilmette Institute also partnered with the Green Acre Bahá’í School to offer an in-person/on-line course on ‘Abdu’l-Bahá’s The Secret of Divine Civilization. Faculty first taught a face-to-face course at Green Acre; then students continued their study by taking an online Wilmette Institute course on the topic.