On June 13, 2017, the Wilmette Institute completed an articulation agreement with the United Theological Seminary of the Twin Cities (UTS), located in New Brighton, Minnesota. The agreement allows seminary students to take a group of core courses on the Bahá’í Faith for graduate credit. 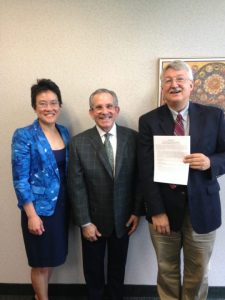 The genesis of the agreement traces to a 2016 decision by Emily Youngdahl Wright, a Bahá’í living in Minneapolis, to pursue a Master’s degree in interfaith chaplaincy at UTS. UTS specifies that, among the 72 credits (24 courses) required for the degree, up to 18 credits (6 courses) can be in the student’s own faith tradition. In late October 2016, Emily telephoned Dr. Robert Stockman, Director of the Wilmette Institute, to ask how Wilmette Institute courses could be included in her degree. An exchange of emails involving Rob and Emily, the UTS registrar Christian Eriksen, and the Academic Dean Sharon Tan followed to work out how much work a Wilmette Institute course would need to have to be worthy of graduate credit. Dr. Stockman flew to Minnesota in December 2016 to work on the arrangement and again in June 2017 to complete the legal agreement, which went into effect immediately. Emily and two UTS students are already registered for graduate credit in the course HS 305: Bahá’í History, 1844–Present.

The newly signed agreement specifies that six core Wilmette Institute courses will be available to UTS students for credit. These include:

In addition, the agreement says that other courses can be included as arranged. Two students have already signed up for ST 340: Introduction to the Kitáb-i-Íqán, Bahá’u’lláh’s second most important work. 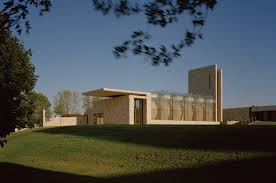 The United Theological Seminary will include the Wilmette Institute’s core courses in its catalog and will list a group of Wilmette Institute faculty as UTS adjunct faculty. UTS will reimburse the Wilmette Institute for its tuition costs. Bahá’í students have two options. They can register as special students with UTS, pay UTS tuition, and take individual Wilmette Institute courses for credit. Or they can consider three Master’s degree options that UTS has designed: a Master of Divinity in Interfaith Chaplaincy, a Master of Arts in Leadership for Social Transformation, and a Master of Arts in Religion. All three professional degrees can include up to six courses on the Bahá’í Faith, and, because UTS is an accredited institution of higher education, its students are eligible for student loans and other financial aid. The Master of Arts degree is available only online, and the Master of Divinity and Master of Arts in Leadership in hybrid/online format. An interfaith chaplaincy degree qualifies one to serve as a chaplain in hospitals and prisons and in the military. Such a profession is a remarkable opportunity for Bahá’ís to serve the spiritual needs of people in challenging personal circumstances. It does not require ordination as clergy.

After the signing of the articulation agreement, Dr. Stockman spoke at the Minneapolis Bahá’í Center to inform the local Bahá’ís of the historic agreement and the new opportunity for service. The joyful evening included prayer, song, and questions and answers about chaplaincy programs with UTS’s chaplain. The evening was capped with ice cream. 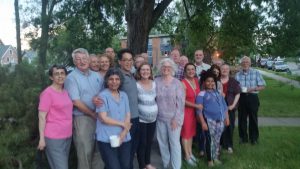 To improve the quality of its courses, the Wilmette Institute has instituted a procedure to vet proposals for new courses, evaluate courses after they have been offered, and review content before a course is repeated. It is increasing the honorarium offered faculty, especially those teaching courses for credit, to that comparable to college adjunct pay. It is raising its expectations from faculty, especially for providing recorded and live presentations and for assessing student work.

The Wilmette Institute has also instituted a new numbering system for its courses, and it has divided them into eight subject areas, each of which will function as a department:

To provide education to a broader range of people, the Institute is expanding its free video offerings. 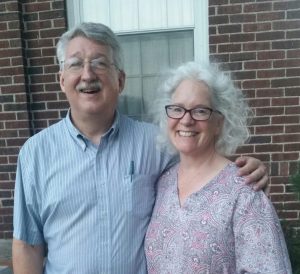 Robert Stockman with Emily Youngdahl Wright,  the Baha’i student at UTS whose efforts led to the articulation agreement

To accomplish its several innovations, the Wilmette Institute plans to increase its staffing over the next year and to set a much higher fundraising goal so that it can continue to remain independent of the Bahá’í funds. Consequently, the significance of the articulation agreement with the United Theological Seminary of the Twin Cities is far reaching and historic. It has brought the Wilmette Institute to the verge of becoming a new kind of institution of higher education: one that is not accredited to deliver degrees but is able to provide accreditable courses as a service to other undergraduate and graduate institutions.